Marvin Hume will lead a special sunset flag ceremony on September 11, honoring all of those who lost their lives on Sept. 11, 2001. 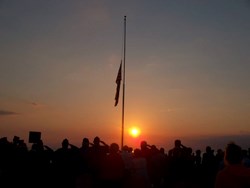 Lower Township will honor those who lost their lives on Sept. 11, 2001 with a sunset flag ceremony led by Marvin Hume.

This special ceremony is scheduled for Sept. 11 at 6 p.m. at Sunset Beach at the foot of Sunset Boulevard in sight of the concrete ship in Lower Township.

The casket flag of Paul Pansini, a New York City Engine Company 10 firefighter who lost his life at the World Trade Centers, will be flown during the ceremony. When Engine Company 26 called for an extra man on 9/11, Pansini answered the call.

Hume, a World War II veteran, has paid tribute to those killed on Sept. 11 since 2003. He has led sunset flag ceremonies for more than 40 years between Memorial Day and Labor Day at Sunset Beach. All of the flags that are flown at Sunset Beach are veterans' casket flags that families bring with them from their loved one's funeral.

The mayors of Lower Township, Cape May Point and West Cape May will speak at the ceremony as well as Lt. Cmdr. Scott Rae of Coast Guard Training Center Cape May. Coast Guard recruits and the Red Knights, an international firefighter’s motorcycle club, will also attend the event.