Statistical misrepresentations, faulty global warming claims and conflicts of interest in the "Costly Diagnosis" report by Pembina Institute should invalidate its call for an early shut-down of Alberta coal plants say Friends of Science. In rebuttal, Friends of Science today released their report -"Costly Misinformed Diagnosis" which details how the move from inexpensive coal power to wind has pushed thousands into heat-or-eat fuel poverty in the UK, with significant health impacts and thousands of deaths. 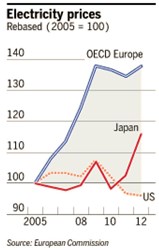 There are people dying, maybe more people die each year [of fuel poverty] than on the roads

Citing evidence from Global Warming Policy Foundation Director Dr. Benny Peiser’s May 15, 2013 presentation in Calgary and a report by Prof. John Hill of the UK, Friends of Science are asking the Redford government of Alberta to reject the Pembina Institute’s "Costly Diagnosis" report, now touted by a health coalition as the basis for phasing out coal-fired electricity plants.

Friends of Science rebuttal report entitled "Costly Misinformed Diagnosis" shows that the closure of coal plants in the UK and the move to expensive wind power has led to skyrocketing electricity rates. Millions of people have been pushed into ‘heat-or-eat’ fuel poverty, fraught with health impacts and thousands of deaths.

Prof. John Hill of the UK is quoted as saying: "There are people dying, maybe more people die each year [of fuel poverty] than on the roads." His report, entitled "Fuel Poverty: The Problem and its Measurement" details how fuel poverty leads to a myriad of health and social impacts, and thousands of premature deaths.

"We are particularly concerned about the misrepresentations about coal plants and health impacts in the Pembina Institute report," says Ken Gregory, director of Friends of Science.

Pembina Institute modelled a number of annual deaths allegedly from coal. Ross McKitrick disputes their figures: "I find this implausible, to say the least."

Pembina Institute is closely associated with TIDES Canada Initiatives which is pushing a "Clean Energy Accord." Pembina's annual report notes that it has received financial support from BluEarth Renewables which is involved in wind farm development.

"These would appear to be conflicts of interest," says Gregory.

"Pembina’s demand for early closure of coal-fired electricity plants are said to help save the planet from global warming. Global warming stopped 16 years ago," says Gregory. "However, global cooling may be imminent based on solar patterns. If so, we’ll need reliable, inexpensive power from coal."

"Costly Misinformed Diagnosis" is posted on Friends of Science website.