Studies for the Detection of Antimatter Asteroids Promoted by the R. M. Santilli Foundation

The R. M. Santilli Foundation is sponsoring studies on Santilli isodual theory of antimatter for the detection of antimatter asteroids as part of a workshop September 22 to 26, 2013, in Rhodes, Greece. For details on the workshop, please visit http://www.santilli-foundation.org/isomathemat-work.php 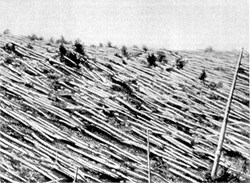 Fig. 1. A view on the devastation caused in Siberia by the 1908 explosion in mid air of an antimatter asteroid with the energy of one thousand Hiroshima atomic bombs.

Excessive beliefs in the validity of Einstein's theories for all possible conditions existing in the universe may endanger mankind.

The R. M. Santilli Foundation is hosting an international scientific meeting on Santilli isodual theory of antimatter and its application to the classical representation of neutral asteroids, stars and galaxies as part of the International Conference of Numerical Analysis and Applied Mathematics, September 22 to 26, 2013, in Rhodes, Greece. Details of the workshop can be found at http://www.santilli-foundation.org/isomathemat-work.php

Special and general relativities have no classical means to distinguish neutral matter and antimatter since their only distinction is the sign of the charge. Consequently, antimatter is widely assumed not to exist in the large scale structure of the universe, evidently to maintain the validity of Einsteinian theories throughout the universe (see http://en.wikipedia.org/wiki/Antimatter).

Antimatter asteroids constitute a serious threat to society, because the annihilation of an antimatter asteroid in the upper atmosphere of North America of only the size of a football, and its total conversion into radiations, would cause unthinkable damage to our Country, including the paralysis of all civilian as well as military communications due to the extreme excitation of the atmosphere as it occurred for the 1908 Tunguska explosion.

In order to confront this threat, the Italian-American scientist Dr. R. M. Santilli has conducted decades of research in antimatter that were initiated in the 1980s when he was at the Department of Mathematics of Harvard University under support of the Department of Energy. Dr. Santilli first constructed a theory allowing the classical differentiation between neutral matter and antimatter, and then confirmed its validity with all available experimental data on antimatter. This new theory is based on a conjugation from matter to antimatter Dr. Santilli called "isoduality," that conjugates all features of matter into the corresponding features of antimatter, including the charge when not null. The resulting new theory is a branch of the covering of quantum mechanics known as hadronic mechanics (see R. M. Santilli, "Isodual Theory of Antimatter with Application to Antigravity, Grand Unification and the Spacetime Machine" Springer 2001).

The first reported International Conference on Antimatter Astrophysics was held at the Republic of San Marino on, September 5 to 9, 2011 (see the website http://www.workshops-hadronic-mechanics.org/). The studies were continued at the International Meeting in Hadronic Mechanics help in Kos, Greece, September 18 to 25, 2012 (see the webpage http://www.santilli-foundation.org/HM-course-schedule-2012.php). The studies on antimatter will be continued at the meeting in Rhodes, Greece, September 22 to 26, 2013. An international collaboration of scientists has confirmed the validity of Dr. Santilli isodual theory of antimatter and launched an appeal for collegial studies due to the threat that antimatter asteroids constitute for mankind (see their report http://www.santilli-foundation.org/docs/Antimatter-2013.pdf).

Dr. R. M. Santilli is the recipient of several honors, such as: scientific prizes from France, Italy, Nepal and other countries; the Gran Cross of the Sant'Agata order from the Republic of San Marino; the Mediterranean Prize also granted to Hillary Clinton, Prince Albert of Monaco , former France President Nicolas Sarkozy, Juan Carlos King of Spain, international architect Renzo Piano, and other personalities (see Dr. Santilli's CV at http://www.world-lecture-series.org/santilli-cv).

Fig. 3. An illustration of the repulsion of antimatter light by a matter gravitational field predicted by the Newton-Santilli isodual equation for antiparticles.

Fig. 2. In the left, a matter asteroid detected with matter light and, in the right, the possible inability to detect an antimatter asteroids due to insufficient knowledge.