A lifelong love of art morphed into a hobby, career and the writing of a Comic Book in 1989 that is now finding an audience. Learn more about this and other collectibles on The Collectors Show, with Harold Nicoll on Web Talk Radio. 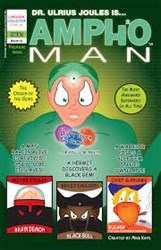 Amphoman is a new comic book series about a doctor who finds gems that give him powers and challenges. Mike Kaye writes and draws the new comic.

Imagine you had the chance to interview or listen to Stan Lee at the start of his career?

Emmy Award winner, owner of http://www.lunchboxcollector.com and the artist and writer of a new comic book, "Amphoman," appears this week on "The Collectors Show" hosted by Harold Nicoll. The popular podcast can be heard on Web Talk Radio.

Kaye first appeared on the program several years ago to discuss his expertise as a lunch box collector. He came back to host and producer Harold Nicoll's attention in August 2013 when Nicoll learned of the new work on a new comic book. "Amphoman is a perfect comic character in that his 'super powers' are both helpful and carry considerable downside," Nicoll said. "That Mike is such a gifted artist, has so much expertise as a collector and is now writing and drawing his own comic book will be extremely interesting to listeners. Imagine you had the chance to interview or listen to Stan Lee at the start of his career, that's the way I felt about talking with Mike."

Kaye took his interest in comics to another level of creativity, but it was several years before Kaye published it and made it available to the public. In 1989, out of Kaye's imagination, came Dr. Ulrius Joules, a doctor suffering from cancer. He discovers an extraterrestrial gem that transforms him into a frogman when he gets wet. "Amphoman" can treat others and stop them from being infected. During the interview, Kaye describes the character in detail and discusses how he struggled to get his comic book noticed. "Listeners will have the chance to know more about the author/illustrator and how to order a first edition comic from the writer," Nicoll concluded.

About The Collectors Show
Some collectors are casual about collecting and pick things up to add once in a while. These are not the people we talk to on The Collectors Show. Our guests are single minded folks whose collections are not just important but help to define them. They have a passion, and laser-like focus that gives insight into not just what makes for an interesting or even valuable collection, but let’s us peer into their souls. To contact Harold Nicoll, email haroldnicoll(at)gmail(dot)com.