Debut Novelist's YA Adventure, "SCHOOL.," Gives Voice to the Carolinas

Coming March 2014 from Bitingduck Press, Hunter Gardner's debut novel, "SCHOOL.," takes its readers on a fast-paced adventure where everything is for sale, from grades to love to hard drugs. Set in Wilson, North Carolina, the book's suburban setting will be familiar to many, but local readers will especially love the abundance of familiar details and bonus e-book contributions by local artists. 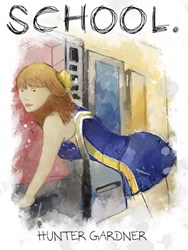 Free time, money, and thirst for adventure lead the teen characters down an increasingly dark path.

"SCHOOL." (Bitingduck Press, March 2014) is a young adult novel by first-time author Hunter Gardner. The story follows Lucas Donovan, an economically minded high school sophomore, who finds himself in a surreal world when he starts dealing drugs at his new private high school. Flanked by his best friend, Jake, and a crew of loyal followers (British transplant, Christopher, and football player with a heart of gold, Tyler Beason), Lucas develops a system that he knows will get everyone exactly what he wants: from a cheerleader girlfriend to money to social power.

The story takes place in Wilson, North Carolina and was written by Gardner while living in Raleigh. The rural setting of Wilson puts the characters in a suburban town, a place where the adolescents have a lot of time and family wealth on their hands—the kind of boredom that is bound to cause trouble. As the business expands, Lucas’ crew finds conflict with a much larger drug ring: one that involves fraternity members at both North Carolina State and the University of North Carolina. After a pivotal scene where unexpected truths are revealed, Lucas’ journey to find answers leads him to Raleigh and Chapel Hill.

Gardner has also lived in Chapel Hill, which gave him the opportunity to observe the details of the small college town. His freshman year experience influenced his perspective when writing the book, particularly his first encounters with hard drugs. "It really rattled me," he admits.

A couple of hallmark scenes in the story also take place at the luminous Acid Park, a local legend in the town of Wilson. The “park” is a showcase of Wilson local artist Vollis Simpson, and has been featured in a PBS documentary as well as The New York Times.

Another local twist to the story will come in the form of an enhanced e-book format that includes custom music clips. The clips will come primarily from North Carolina bands around the Triangle area, such as The Old Ceremony (Raleigh), Morning Brigade (Chapel Hill) and Stoplight Observations (Charleston).

"SCHOOL." is currently available to reviewers on NetGalley or upon direct request to the author or publisher.

Founded in 2012 by two physicists, Bitingduck Press acquired Raleigh-based Boson Books just over a year ago. One of the first electronic publishers, Boson has been producing e-books since 1994, with formats and features evolving with the technology. Continuing Boson's legacy, the Bitingduck publishers will take advantage of new e-book formats (iBooks Author, Epub3) to create the musical features in "SCHOOL." The press is currently accepting manuscripts in all genres, particularly young adult and hard science fiction. Submissions and requests for review copies can all be made at the publisher site.