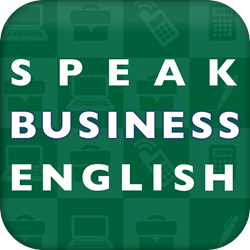 The innovative new ESL app teaches over 300 American English idioms useful for business. The app is the perfect tool for those who need to improve their business English. Through realistic business scenarios, users will learn to use the business English idioms and expressions that are most popular today. Expressions taught in the app include: pretty penny, in the red, step up to the plate, wishy-washy, and fast followers.

Lessons in the app include: talking about company strategy, running a meeting, motivating co-workers, talking about financial issues, discussing good and bad results, and more.

The Speak Business English app includes many cutting-edge features designed to help the learner improve their English quickly. Features include interactive quizzes with immediate feedback, the ability to record oneself reading the dialogues and re-play the recordings, pop-up definitions of expressions, and entertaining dialogues.

"The app teaches the American English business vocabulary that business people need to know today," says Tanya Peterson, Marketing Director of Language Success Press. "Business English is constantly evolving, and it's important to keep up with the changes. This app features the expressions most in use in the workplace today."

The Speak Business English app offers two lessons for free. Users can then purchase the remaining 28 lessons for $16.99 or buy 14 lessons at a time for $9.99.

Since launching its line of ESL apps in 2010, Language Success Press apps have been downloaded by thousands of English language learners in 60 countries around the world.