Fictional detective Dick Love is smart in more ways than one. The hero of the first Wolf Black novel is a chic dresser whose Doreanse boxer shorts were chosen by author Rosemary Bach-Holzer from men's underwear specialists Deadgoodundies.com. 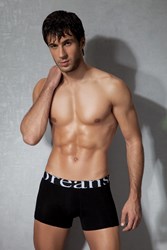 It was hard work having to scroll through pictures of men in their underwear but I'm a professional so I persevered.

E-book author Bach-Holzer’s detective hero Dick Love is the star of her first novel under the pen name Wolf Black. Love is a smart dresser so she scoured the internet to find him the right underpants and ultimately chose the Doreanse 1777 boxer brief in black. The chic black undies even get a special mention in one chapter (https://www.smashwords.com/profile/view/wolfblack).

Asked about her new book and the underpants angle, Bach-Holzer said: “I've published seven eBooks under my name with more bubbling away and one - Enigma - under the pseudonym Wolf Black. You could say describing the underwear belonging to the hero of the hour - and in such detail too - as possibly psychotic, certainly, although I prefer punctilious. Put it down to Wolf Black's slant. Think of it as his signature.”

Asked how she found the right pants for Love, Bach-Holzer added: “I arrived at the Doreanse briefs simply by tapping in 'designer underwear men’s' and I liked the Deadgoodundies.com site the best by far. It was hard work having to scroll through close-up pictures of men in their underwear but I'm a professional so I persevered!

“Eventually I came across the Doreanse 1777 Boxer and knew I'd found Dick Love's briefs. Wow! Choose the underpants and then your man…”

Deadgoodundies.com founder Adam Davies is delighted by the mention in Enigma, "especially as we originally introduced Doreanse to the UK and it is always one of our best selling collections."

Adam is hoping Wolf Black will continue the Dick Love story and extend his underwear selection in the next book. “Deadgoodundies.com can provide him with plenty of underpants, but also men’s swimwear, nightwear, loungewear and some seriously posh socks.”

DGU are incredibly media friendly and always have high res images for fashion pages and samples for photo shoots as well as expert comment and market insight from partners Adam Davies and Jane Garner.

Doreanse 1777 Boxer Brief (white) £13.50This chic short is available in black or white.