Basketball fans can now purchase their 2013-2014 NBA tickets at Ticketmonster.com. TicketMonster.com has the best value for NBA Tickets on the web. 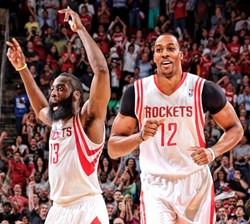 Dwight Howard and the Houston Rockets have proved to the sports world that they will indeed be living up their hype. Howard, who debuted with the Rockets Wednesday night, came out with new teammate James Harden and made some big statements as they controlled the floor. Harden scored 21 points, and Howard was a tremendous player on both offense and defense. He had 17 points on the night, but more importantly came away with 26 tremendous rebounds, which would tie his career high. That number also marks the 63rd time he had a game with more than 20 rebounds. The two led the Rockets to their first 96-83 win of the season over the Charlotte Bobcats, the first of many I’m sure.

Howard left the Lakers this year to join Harden the Rockets, a team that made the playoffs last season for the first time in three years. In the fourth quarter of the game, the Rockets led by only four points before making a 14-4 run to extend their lead with about three and a half minutes left. This game marks the beginning of a tremendous season for Houston, one that may just be historic in the end.

Wednesday night was a big night all around the NBA and for more than just the Rockets. Records were set and impressions were made as the 76ers stunned the Heat and brought them down 114-110. The 11th round pick in this year’s draft, Michael Carter-Williams made one of the biggest impressions of all. The 22 year old had a top night for any NBA player, especially a rookie. Carter-Williams put 22 points on the board, as well as 12 assists, 9 steals, and 7 rebounds. The 9 steals made his night a historic one, as that is the most number of steals for a player making his NBA debut. This was unquestionably one of the greatest rookie first performances in the league’s history.

Over on the other side of the country, the Oklahoma City Thunder also decided to win their first game, defeating the Utah Jazz 101-98. In the win, star Kevin Durant decided he also wanted to make headlines, as he scored an astonishing 42 points. Furthermore, 22 of that number came solely from the free throw line. Not only did Durant perform outstandingly, but he did so without fellow star teammate Russell Westbrook. Westbrook has been out due to injury, with an original estimated time out of 4-6 weeks from the beginning of the season. The Thunder may get a pleasant surprise with his return however, as he is progressing quickly. Although the Thunder are great without him, Westbrook had averaged 23.2 points last season, as well as 7.4 assists and 5.2 rebounds, and his talents could surely be used on the floor in important games to come.

Purchase 2013-2014 NBA tickets at http://www.Ticketmonster.com. Ticket Monster does not charge any fees like StubHub, and strives to make purchasing an NBA ticket an easy and fun process. Ticket Monster not only sells basketball tickets, the site also has updated videos, an active blog, and a social media hub where fans can interact with others about their basketball passion. Visit http://www.Ticketmonster.com today to purchase your 2013-2014 NBA tickets.