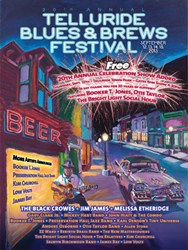 This year marks the 20th annual Blues & Brews Festival in Telluride, Colorado. To kick off the festival weekend in Telluride and to show their appreciation after two decades of putting on one of the most respected festivals in the country, Blues & Brews is excited to announce a free to the public 20th Annual Celebration Show featuring Booker T, Jones, Otis Taylor Band, and The Bright Light Social Hour.

"We are truly looking forward to celebrating our 20th year in Telluride," said Steve Gumble, Festival Director. "With 20 years of community support, we want to show our appreciation with this show to kick of the festival weekend in Telluride. We want to give back for all the wonderful years of fan and community support. We dedicate our success to our fans and the community of Telluride and we couldn't have made it this long without their support."

The Thursday show kicks off at 4:30 p.m. in Telluride Town Park, on Thursday, September 12th with gates opening at 4 p.m. Food, beverage and craft vendors will be available on-site for the duration of the event.

Renowned as one of the most scenic and intimate music festivals in the country, Telluride Blues & Brews takes place in Telluride, CO -- a world-famous resort town in the heart of the Rocky Mountains. The festival is a three-day celebration of music and microbrews, held in Telluride Town Park, an outdoor music venue with breathtaking 13,000 foot mountain peaks for a backdrop. By day, experience live blues, funk, rock, gospel and soul performances, the best microbrews in the country, a wide variety of food and craft vendors, children's activities, and much, much more - all within the festival grounds and only a couple blocks from the heart of Main Street, Telluride. By night, follow the festival music as it flows into town, where late-night Juke Joints fill indoor venues for after-hours jams, where you never know who'll show up!

This year's Sunday Fais Do-Do closing late night show will feature Karl Denson's Tiny Universe. This intimate weekend performance happens at the Historic Sheridan Opera House on Sunday, September 15th at 10:00pm. Limited tickets for the Fais do-do are $25 per person and are currently on sale.

Three-day, Single Day, and Juke Joint (late night) passes are currently on sale. Three-day passes are available for $170 each, Saturday and Sunday Single Day passes are $65 each, and Friday passes just $55 each. Juke Joint passes are $25 per night, and feature late night jams at various intimate venues. Festival 4-day camping passes are $40 per person, with camping located adjacent to the Festival grounds starting Thursday, September 12.

Save 20% on Lodging for the 20th Annual Telluride Blues & Brews Festival, September 13-15, 2013! Book by Friday, August 16th and receive 20% off hotels, condos and private homes in Telluride or Mountain Village for this anniversary festival weekend through partner Telluride Alpine Lodging.

About
Telluride Blues and Brews is one of the most scenic music festivals in the country, a three day celebration of music and microbrews held every September in the world-famous resort town of Telluride, Colorado, in the heart of the Rocky Mountains.