Industrial Surplus launches a nationwide campaign in the United States and Canada to provide demolition services. 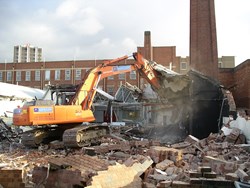 Industrial Surplus employees and personnel are experts in the demolition field and have the know-how to handle any demolition project. It does not matter the hazards.

When searching for a good demolition contractor, it is important to know what questions to ask, the scope of the project, and what skills are needed to perform the job right. It is a skill that you must learn while on the job. It is not taught in any textbook, and its not listed in any college curriculum. How to get the most from your demolition contractor is an on-the-job training exercise. In every case, it requires some level of trust when hiring a demolition contractor.

Cranes, bulldozers, tractors, dump trucks, wrecking balls, excavators, hydraulic shears, rock-breakers, contract labor and the skill set are all needed in a demolition project. Industrial Surplus has all of the equipment and the experience to demolish any building or manufacturing site.

Demolition projects can be dangerous as well. Wrecking balls, chemicals, heavy equipment, electrical wires, and power supplies. Industrial Surplus employees and personnel are experts in the field and have the know-how to handle any demolition project. It does not matter the hazards.