The distinction of being named to the national historic register reinforces the hotel's historic relevance and restoration as a local landmark. The Northern is once again hosting weddings, conferences, meetings and luncheons. 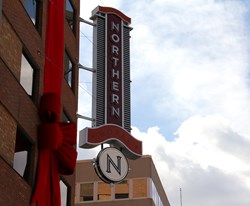 We’re pleased the Northern was named to the official list of the Nation's historic places worthy of preservation. It is great to have the hotel back as the cornerstone of downtown Billings.

The Northern Hotel today announced it was named to the National Register of Historic Places. This distinction further reinforces the newly remodeled hotel’s status as a local landmark and its historic traditions. The register is part of a national program that identifies and protects America’s historic and archeological resources.

“We’re pleased to be named to the official list of the Nation's historic places worthy of preservation,” said Mike Nelson, co-owner of the Northern Hotel. “The Northern has experienced a long and colorful history since 1902. It is great to have the hotel back as the cornerstone of downtown Billings to continue building on its wonderful past and our family’s legacy of historic preservation in the community.”

Several prominent politicians have stayed at the hotel including; President Theodore Roosevelt in 1918, President Woodrow Wilson in 1919, Democratic presidential contender Adlai Stephenson in 1952 and Vice President and Republican presidential nominee Richard Nixon in 1960. The Northern also played a role in the war effort during World War II. It housed 100 soldiers for several months and opened a “service man’s club” promoting dances and other entertainment for the soldiers. In 1942 it held the distinction of being the tallest building in Montana at 129’ 3”.

Over the years many political, economic, and social events in Billings and the region have taken place at the Northern Hotel. Most, if not all, of Billing’s service club organizations have held their weekly meeting at the hotel, and the Northern hosted luncheons and conferences for the Billings Chamber of Commerce and Billings Commercial Club. The Annual Governor’s Banquet Ball was also held here.

Restoration of the hotel began in 2009 with a focus on returning it to its former state of grandeur as the most luxurious place in the state. The latest reincarnation includes the most state-of-the-art technology and modern conveniences available. Since its grand re-opening in March, the hotel has hosted numerous weddings, conferences, meetings and luncheons continuing the tradition of the Northern as the hub for social activity.

About the Northern Hotel

The Northern Hotel was first established in Billings, Montana in 1902. After undergoing a complete renovation, the hotel reopened in March 2013 under new management. The Northern now includes 160 guest rooms and suites filled with first-class amenities, a gym, gift shop, two restaurants-TEN and Bernie’s Diner-and more than 12,000 square feet of flexible meeting space. With its luxurious design, state-of-the-art technology, and two dining options, the Northern is once again the hotel to stay in and host any event in Montana. For additional information, please call 406-867-6767 or visit http://www.northernhotel.com.