Veronica Foods Company of Oakland, California is hosting an all-star line up of expert presenters for the 2nd Annual 2013 Olive Oil Summit. 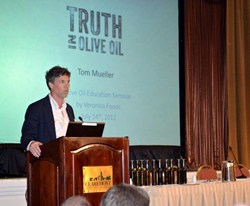 Driving change from below, by educating consumers, will reform the olive oil market faster than government regulation or oversight from above.

An all-star line-up of presenters is anticipated at the 2nd Annual International Olive Oil Summit on Saturday, July 27th 2013. The event is hosted by olive oil pioneer and visionary, Veronica Foods Company. The one-day education summit will be laser-focused on the sensory, scientific, and health aspects of extra virgin olive oil. The event kicks off the official launch of the “UP” or Ultra Premium Olive Oil Standard developed by Veronica Foods Company to create heightened consumer awareness through education, trace-ability, and the world's strictest production, handling, and chemical parameters for extra virgin olive oil. When asked about his company’s effort to impact change in the industry, Mike Bradley, president of Veronica Foods remarked, “It’s in pursuing the difficult where we have discovered the friendly faces and lasting rewards. Our goal has been to change hearts and minds through education concerning one of the oldest, most noble, but cynically abused super-foods. It does not suffice to simply provide the compelling scientific evidence for quality. It is the shared daily life experiences of top farmers, millers, chemists, nutritionists, chefs, writers, and trained extra virgin olive oil sensory experts that make this summit uniquely effective. When hundreds of retailers working directly with the public are encouraged to learn firsthand from the top experts in the olive oil world, magic can, and does occur.”

Attendees will have an opportunity to taste a flight of the freshest, highest quality, Certified Ultra Premium extra virgin olive oils from both hemispheres, meet the estates that produced them, including Boundary Bend Estate and Oliperu Estate, which both took Best of Class Awards for Picual in the recent New York Olive Oil Competition. Renowned presenters will speak about their field of expertise in olive oil, and a multi-course meal will follow highlighting menu pairings with Ultra Premium single cultivar extra virgin olive oils from around the world.

Leandro Ravetti, head of the Modern Olives technical team and Journalist Tom Mueller, author of the book: Extra Virginity, are just two of the highly respected presenters convening for the summit. Mueller says, "Driving change from below, by educating consumers, will reform the olive oil market faster than government regulation or oversight from above. As soon as the consumer starts demanding great oils, like those sourced and imported by Veronica Foods, the market will start treating true extra virgin olive oil as a premium gourmet product and an elixir of health, instead of an industrial fat as it's currently considered by many oil dealers."

Other speakers include Richard Cantrill - Chief Science Officer & Technical Director of American Oil Chemists Society, Paul Vossen - UCCE Farm Advisor, Richard Gawel - Presiding Olive Oil Judge, Researcher, and Tasting Wheel Author, Dr. Mary M. Flynn - PhD, RD, LDN, Associate Professor of Medicine at Brown University and a research dietitian at The Miriam Hospital in Providence, RI, Mauro Amelio - scientific adviser, teacher, and taster at the ONAOO of Imperia Italy, as well as many award winning producers, tasters, and experts. Prior to the one-day summit, the ONAOO (Organizzazione Nazionale Assaggiatori Olio di Oliva), the oldest and most illustrious olive oil tasting school in the world, which developed the taste test protocol that forms the core of IOC, EU, USDA and other olive oil grading methods, will be instructing a three-day intensive olive oil certification course at Veronica Foods Company, and a one-day sensory workshop for 125 serious connoisseurs traveling from all points of the globe to attend.