Hundreds of Jacksonville Military Teens Find the Dress of their Dreams at USO’s Operation: That’s My Dress! 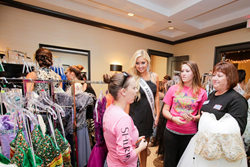 At the USO's Operation: That's My Dress!, a daughter of a military family gets help fom Miss Arizona USA.

I want them to feel like they are rockstars and whatever dream they have, it can be attained

On Sunday, 400 military teenagers from the Jacksonville area had the chance to make their dreams come true at the USO’s Operation: That’s My Dress! Hosted by the USO and Sherri Hill, international designer for Hollywood celebrities and pageant contestants, Operation: That’s My Dress! is a fashion extravaganza that gives military daughters the opportunity to choose a dress designed and donated by Hill.

For teenage girls, the fall season is time to find a beautiful gown for their upcoming holiday parties, homecoming dances and special events. Military families however, are often on a budget and it can seem like their perfect dress for a military teen is unobtainable. Hill, who attended Sunday’s event for the second time, has donated more than $2.5 million worth of dresses to USO’s Operation: That’s My Dress! She said it was a amazing day to show military families her gratitude for the service and sacrifices they make.

“It touches my heart,” said Hill. “These are all daughters of military personnel. So, we're thrilled to have the opportunity to do something for them.”

USO of Metropolitan New York Vice President Ray Kennedy, who has lead all the Operation: That’s My Dress! events since the program’s inception, knows this day is more than a dress giveaway for military teens. He said he wants girls to leave feeling not just beautiful, but confident.

“My biggest wish is that these women leave feeling empowered,” said Kennedy. “That they feel like they can do anything and accomplish anything they want to. I want them to feel like they are rockstars and whatever dream they have, it can be attained.”

The day kicked off with a peppy performance by the USO Show Troupe and a fashion show that featured Miss USA and Miss Teen USA state title holders modeling Sherri Hill gowns. The teens and their families watched the models and dresses in amazement, as they would soon get to try on and pick out a dress of their own.

After the fashion show, doors opened up to a fully stocked Dress Expo where more than 1,700 designer dresses glistened on their hangers. Ranging in value from $450 to $2,000, the glamorous dresses came in many sizes, styles, colors and lengths. During the Dress Expo, the USO Show Troupe and Miss USA and Miss Teen USA title holders greeted teens as they walked in and helped them find a dress and accessories for their upcoming events.

Becca Klein, whose father serves in the U.S. Navy, attended Operation: That’s My Dress! in hopes of finding the dress of her dreams to wear to her high school prom. The best part for military families, like the Klein family, is not having to worry about the price tag.

“It's amazing that [the USO] did this,” said Klein. “It is awesome because some of us girls would not be able to get dresses without [this event].”

With help from Angie Layton, Miss Utah USA 2014, Klein went home with a long, bejeweled blue gown. Like all the teenage girls at Operation: That’s My Dress!, Klein had a full day of pampering, including hair styling, makeup and time to pick out jewelry to complete their formal look. Klein’s mother, Nancy, who is also a military spouse, said she was thrilled this event catered to military daughters.

"They've sacrificed almost as much as their parents do," said Nancy Klein. "Not having their parents around for however long they are gone. It makes a world of difference that someone actually thinks about them, not just us."

Once each military daughter found her dress, she was lead to the Beauty Bar, where they found many hair products, makeup and perfumes to choose from. The Beauty Bar was made possible by L’Oreal, Fashion Delivers, Murad, Arrbonne and other generous donations.

To show each teenage girl how to create a beautiful look to compliment her dress, more than 16 professional hair and makeup artists donated their time. In addition, a few days before Operation: That’s My Dress!, the USO partnered with L’Oreal to bring several military daughters to New York City for “A Day of Beauty.”

While teens were at the Dress Expo, their families enjoyed a homecoming themed football party in the company of retired NFL player Donovin Darius. The younger siblings of girls attending the event lined up to meet Darius and get his autograph. The football fanfare was complete with typical tailgating food and a big screen television to watch the Sunday football games.