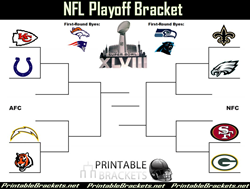 The 2013 NFL season couldn’t have ended in more exhilarating fashion.

“The 2013 NFL season couldn’t have ended in more exhilarating fashion,” said PrintableBrackets.net spokesperson Zaniel Worth. “With no clear-cut favorite in either conference, the playoffs promise to be just as wild.”

The playoffs will kick-off when the Chiefs clash with the Colts in Indianapolis in the first AFC Wild Card bout. Andy Reid was able to lead the Chiefs to an 11-5 record and a Wild Card berth in his first season in Kansas City. Andrew Luck and the Colts captured the AFC South crown after also going 11-5.

In the other AFC matchup, the Chargers will square off with the Bengals in Cincinnati on Sunday. The 9-7 Chargers clinched the final playoff spot in the AFC on the final day of the season. The Bengals rolled to the AFC North title after going 11-5.

Peyton Manning and the Broncos along with Tom Brady and the Patriots are the top two seeds in the AFC and have a bye.

In the NFC, the first matchup on the NFL playoff bracket pits the Saints against the Eagles. The Saints stumbled down the stretch en route to going 11-5 and earning a Wild Card berth. The Eagles escaped Dallas with a 24-22 win over the Cowboys to clinch the NFC East championship in the final game of the season.

The final game of Wild Card Weekend features a playoff rematch between the 49ers and the Packers. The defending NFC champion 49ers are back in the playoffs after going 12-4. The Packers used a miracle finish to beat the Bears and capture the NFC North title on the final day of the season. The 49ers hammered the Packers in last year’s Wild Card round.

The Seattle Seahawks and Carolina Panthers are the top two seeds in the NFC and have Wild Card Weekend off.

For the complete NFL playoff bracket, or for hundreds of other printable sports brackets and sheets, please visit PrintableBrackets.net today.