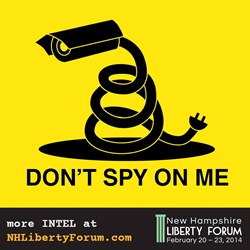 After Edward Snowden’s revelations about NSA spying, we knew we wanted to highlight the surveillance state. One of our featured speakers, Thomas Drake, was Snowden before Snowden.

Today the Free State Project announced the speakers at its seventh annual Liberty Forum, which will highlight political activism, whistleblowers, and solutions to the national security state. This year’s theme: Watching the Watchers. Regarded as one of the most prestigious liberty conferences worldwide, Liberty Forum will be held February 20-23, 2014 at the Crowne Plaza Hotel in Nashua, and attracts speakers and attendees from across the globe.

“After Edward Snowden’s revelations about NSA spying, we knew we wanted to highlight the surveillance state,” said Carla Gericke, president of the Free State Project. “One of our featured speakers, Thomas Drake, was Snowden before Snowden.”

Drake, a former NSA senior executive, became a material witness and whistleblower for two 9/11 congressional investigations. The Justice Department targeted, prosecuted, and indicted Drake for espionage as a whistleblower--and lost. Drake’s attorney, Jesselyn Radack, who together with Drake visited Snowden in Russia earlier this year, will also be speaking.

Friday evening’s keynote speaker is international bestselling author and political activist Naomi Wolf. Wolf’s New York Times bestseller, The End of America: A Letter of Warning to a Young Patriot, is an impassioned call to return to the aspirations and beliefs of the Founders’ ideals of liberty. Her book Give Me Liberty: A Handbook For American Revolutionaries, includes effective tools for citizens to promote civic engagement.

Cody Wilson, best-known as a co-founder of Defense Distributed, a non-profit organization that develops and publishes open source gun designs suitable for 3D printing, will also be in attendance. Wilson was named one of "The 15 Most Dangerous People in the World” by Wired Magazine's "Danger Room."

Trevor Timm, co-founder and executive director of the Freedom of the Press Foundation, which supports and funds independent journalism organizations dedicated to transparency and accountability in government, will also be speaking. He is an activist at the Electronic Frontier Foundation, where he specializes in surveillance, free speech, and government transparency issues.

This year, for the first time, two participant-driven sessions are offered. On Thursday evening, up to 20 Ignite Talks will be presented by audience members. At these self-described “geek events,” Ignite presenters share their personal and professional passions, using 20 slides that auto-advance every 15 seconds for a total of just five minutes. On Friday afternoon, an Unconference is offered, where attendees can show up and claim a 15 minute time-slot to speak about any subject they would like to inform others about.

Conference goers will also learn more about the Free State Project and moving to New Hampshire, including information about the local job market. Attendees are encouraged to visit New Hampshire the week leading up to Liberty Forum to take advantage of local meetups across the state.

VIP tickets to Liberty Forum, including all speeches, meals and VIP perks are $405 each. Adult tickets including speeches and meals are $280, and speech-only day passes can be purchased for $80. A full list of speakers and the schedule can be viewed at the Liberty Forum’s website, where tickets can be purchased. The Free State Project also accepts bitcoin as payment.

Reporters interested in obtaining media passes to the event are encouraged to contact Kari DePhillips at kdephillips(at)FreeStateProject(dot)org.