Will Recreational Marijuana Result in More Violence Committed by the Mentally Ill? Author Janice Holly Booth Sees an Increase in Violent Crime on the Horizon

New true crime book, A Voice out of Nowhere, reveals how marijuana use contributed to a gruesome mass murder committed by a young man who was mentally ill. 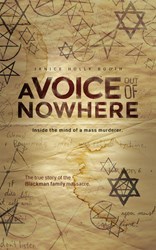 A Voice out of Nowhere

Marijuana and mental illness are a bad marriage.

Marijuana and mental illness are a bad marriage, says author Janice Holly Booth, whose recent best-selling true crime book -- A Voice out of Nowhere: Inside the mind of a mass murderer -- highlights an example of how excessive marijuana use contributed to violence committed by a young man with schizophrenia. As States begin to legalize recreational marijuana, lawmakers should consider how the drug can adversely impact the health, well-being and safety of individuals with mental illness, including those who have not yet developed symptoms.

A Voice out of Nowhere tells the true story of Bruce Blackman, a 22-year-old man with no history of violence but an 8-year marijuana habit and undiagnosed schizophrenia. Blackman committed a gruesome slaughter of six members of his family while under the influence of the drug, and during his interrogation referred to the drug as “wicked,” and that it “takes you out of this world.”

A Voice out of Nowhere takes readers into the mind of Blackman as he succumbs to the voices and delusions that drive him to kill his family. After his incarceration in a mental hospital, psychiatrists would blame Blackman’s marijuana habit as a contributing factor in his psychotic break from reality.

The National Alliance for Mental Illness (NAMI) states that violence is more prevalent among mentally ill people who also have substance abuse issues. “Both domestic violence and suicide attempts are more common, and of the mentally ill who wind up in jails and prisons, there is a high percentage of drug abusers.”

Research suggests that marijuana use can accelerate a diagnosis of schizophrenia, with one study claiming that users who smoked marijuana at age 18 had a 600% higher chance of receiving a diagnosis of schizophrenia over the next 15 years. NAMI says “Some professionals speculate that there may be some underlying vulnerability of the individual that precipitates both mental illness and substance abuse. They believe that these individuals may be at risk with even mild drug use.”

For a long time, marijuana has been considered a "soft drug," and it's been legalized for medicinal purposes in 20 States and DC, but its danger for people who may be vulnerable for developing schizophrenia is a real concern, says Booth. "Once legally available, the temptation to try it is no longer tempered by concerns about breaking the law. I think we'll see an increase in the number of young people with as-yet undiagnosed mental illness using and abusing marijuana, and -- unfortunately -- a subsequent rise in violent crimes committed by them."

BIO:
Born in British Columbia, Janice Holly Booth is also the author of the best-selling Only Pack What You Can Carry, a guide to personal growth through solo adventure travel, published by National Geographic. She holds a master’s degree in Leadership and spent 20 years as a non-profit CEO before becoming a full-time writer and speaker. She currently lives near Charlotte, North Carolina.