Building damaged by 2010 earthquake is updated for use as an elementary school for more than 200 students. 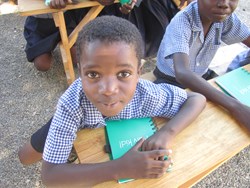 From the beginning, our goal was to give these children not only a home but provide education and job training.

The Reliv Kalogris Foundation (RKF), the charitable arm of Reliv International, Inc., today announced the opening of St. John the Baptist National School of Petite-Anse, Haiti. The school building, damaged in the 2010 earthquake, had been declared unsafe for use in case of future earthquakes. The RKF provided funds to upgrade the building for sanctioned use as a functioning elementary school.

RKF support reinforced and refurbished the school building and stocked it with new desks, blackboards and supplies. The school now serves more than 200 children from the surrounding area, grades K-6, and plans are in place to expand the facility to serve more than 500 students, including a trade school for older youth.

The school is located just steps away from the Reliv Kalogris Foundation’s children’s home, opened in May 2011. The children’s home, a three-story stand-alone structure with three dormitory-style wings, a fully furnished kitchen and two dining halls, provides housing for more than 40 children, most having lost family in the 2010 earthquake.

“From the beginning, our goal was to give these children not only a home but provide education and job training, as well as supplying our nutritional supplement on a daily basis. Through the generosity of Reliv Distributors and employees, we have reached that goal,” said R. Scott Montgomery, chairman of the Reliv Kalogris Foundation. “The children are thriving and have developed a new family unit in their home and school. The daily nutritional shakes are provided not only to the children in our home but to the 200+ children from the surrounding neighborhood who are also attending this neighborhood school.”

“The Foundation is currently nourishing over 12,000 children in 47 schools, orphanages and clinics throughout Haiti and we are committed to continue our presence in Haiti for years to come,” he added.

About Reliv International, Inc.
Reliv International, based in Chesterfield, Mo., produces nutritional supplements that promote optimal nutrition along with premium skincare products. Reliv supplements address essential nutrition, weight loss, athletic performance, digestive health, women's health, anti-aging and healthy energy. Reliv is the exclusive provider of LunaRich® products, which optimize levels of lunasin, the peptide behind many of soy’s health benefits. The company sells its products through an international network marketing system of independent distributors in 15 countries. Learn more about Reliv at http://www.reliv.com, or on Facebook, Twitter or YouTube.

About the Reliv Kalogris Foundation
The Reliv Kalogris Foundation is named for the late Dr. Theodore "Ted" Kalogris, who created the nutritional formula that would become Reliv International's first product. The foundation, founded in 1995, today provides free nutritional supplements daily to more than 42,000 malnourished people in nine countries.