5ft Teddy Bears from Giant Teddy are used explosively by Jamie Hyneman in his bid to conquer Adam Savage's sofa fort. Ideas for the fort as well as offense and defense strategies came from a kid-powered brainstorming panel, inspiring the Mythbusters stars to create some very adult dangerous toys out of teddy bears. 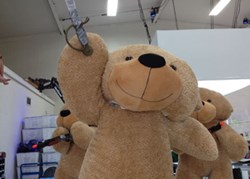 The 60-inch bears Jamie used as the basis for his army came from Giant Teddy, whose bears have also appeared on such shows as Modern Family. Pictured: several Shaggy Cuddles bears. Image Credit: DCL

Watching our 5ft Giant Teddy bears on TV with Jamie Hyneman and Adam Savage from Mythbusters was great, but it was hard to see them used so violently.

When Jamie Hyneman and Adam Savage of TV’s “Mythbusters” fame planned their new show, “Dangerous Toys,” a one-hour special that premiered Saturday on The Discovery Channel, the producers turned to the Giant Teddy company for some life size bears. Giant Teddy was assured that the show was not about toys that are actually dangerous, but that the stars would be making normal, safe toys into something dangerous.

The show features Jamie and Adam tapping into the creative imagination of kids and then creating some very grown-up interpretations of the ideas generated during a kid-powered brainstorming session. How would you build a strong fort? How would you knock it down? What weapons would you use on the enemy? The answers from the kids inspired Adam to build a 25-foot high sofa fortress with a moat that he challenged Jamie to knock down with some interesting weaponry.

Jamie planned offense strategies such as using the 5ft bears from Giant Teddy for a rolling robot bear army to march on the fort carrying plastic swords… and then be detonated to explode in a fiery blaze.

As Jamie opened all the boxes from Giant Teddy on camera, he denied the big teddy bears (light brown ones named Shaggy Cuddles and dark brown ones named Brownie Cuddles according to Giant Teddy's website) any hugs and instead ripped their heads off, stuffed a bomb in each head, and then put metal rods through their bodies to attach them to rolling robotic platforms.

Probably not what the kids had in mind when a little girl mentioned, “Teddy bears,” during the brainstorming session, but certainly in keeping with the style of the two stars of Mythbusters.

Giant Teddy CEO Ray Kohsravi said, “Anything those guys do is pretty cool and this was no exception, but our company is all about using teddy bears to spread love and happiness, so it was hard to see them used in such a violent way. I wish they would have used them to negotiate a peaceful sofa fort resolution instead, but I know that wasn’t the point of why they made this show.”

Giant Teddy makes bears in sizes from 18 inches up to six feet tall in many colors and personalized styles. For more information on the company and the bears used in the show, visit GiantTeddy.com. You can follow Giant Teddy on Facebook, Twitter, Pinterest and Google+.

Jamie and Adam's twisted visions for their weapons, vehicles and fortifications draw inspiration from the decidedly unique perspective of their young brain trust. Image Credit: DCLPictured: Jamie Hyneman and Adam Savage with their kid brain trust