Julian Omidi and Dr. Michael Omidi, cofounders of No More Poverty, are pleased that the new leader of the Catholic Church includes poverty and helping the world’s poor at the top of his priority list. Global media stories speak of the revolutionary words and actions of this new leader who encourages a return to Christian values of compassion and service. 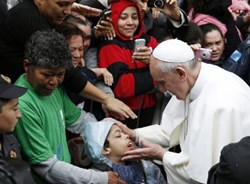 No More Poverty and cofounders Julian Omidi and Dr. Michael Omidi are thankful that the plight of the world’s poor is now receiving more attention through the words and actions of the new leader of the Catholic Church. The socially-conscientious Pope Francis includes helping poor people around the globe as one of his main priorities. His public comments, broadcast by media outlets everywhere, routinely include a call to the one billion Catholics around the globe to focus on restoring justice and helping one another.

According an article published on the thedailybeast.com January 4th, 2014 titled "Home and Change in the Vatican" the pontiff was quoted as saying, “poverty in the world is a scandal. In a world where there is so much wealth, so many resources to feed everyone, it is unfathomable that there are so many hungry children, that there are so many children without an education, so many poor persons.” (http://www.thedailybeast.com/articles/2014/01/04/the-social-minded-pope-francis-is-a-very-different-kind-of-pontiff.html)

No More Poverty believes that now more than ever, leaders are needed who promote social justice and encourage others to act on behalf of society’s poor and marginalized. The miseries of the poor are completely preventable and easily solved if we all join forces and work together.

Pope Francis, many say, is leading a revolution of the Catholic Church with his core messages of peace, love, service and compassion resonate with many believers, particularly the younger generation. Rather than defending the institution of Catholicism as most of his predecessors, Pope Francis is calling the church to return to its main mission of loving and helping one another.

No More Poverty (http://www.nmp.org) is a not-for-profit charity organization (with a pending 501(c)3 application) founded by brothers Dr. Michael Omidi and Julian Omidi. The organization seeks to end poverty at home and abroad by supporting the efforts of like-minded charities and agencies. Current efforts are focused on increasing awareness of and donations to charities already doing great work to address poverty and its staggering effects throughout the world. The plan is to expand our activities to include fostering business development and job creation in disenfranchised areas.