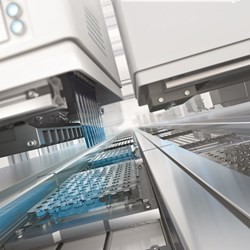 Festo will demonstrate at SLAS 2014 the benefits of transferring advanced handling and robotic systems from industry to medical laboratories. And for the first time at SLAS, the company will have two demonstrations drawn from the Festo Bionic Learning Network, a collaboration among a number of universities and Festo. The Bionic Handling system modeled after the elephant’s trunk, as seen on PSB’s Nova, and the AquaJellies, robotic jelly fish, will be on display (Festo Booth #735).

At Booth # 753, Festo will also be showcasing its mini-H gantry EXCM, a revolutionary desktop handling system for medical laboratory automation. The planer surface gantry system is fast, accurate, modular, and flexible. It is also plug-and-play for quick and easy start up. The design of the new mini-H gantry is derived from industrial-scale systems being used in the semi-conductor, electronics assembly, and food and beverage industries.

Typical applications include transfer of micro-well plates, liquid dispensing/pipetting with the addition of a Z-axis, sample preparation and transport, barcode-based sample identification, sample distribution, aspirating, incubating, dispensing, and archiving. This system moves samples on a planer X/Y axis with an absolute positioning accuracy of + .05 inches and a repetition accuracy of + .01 inches.

Piezo-valve-based technology for gas control will be on exhibit as well. Compact, energy efficient Piezo valves have a host of mobile and stationary applications, including in vitro diagnostics and respiratory care.

Seagulls, seals, lizards and elephants all play a role in new product development at Festo. Dr. Andreas Schule, MedLab Business Manager, will explain how the Festo R&D group derives basic technical principles from the natural movements of animals, and transfers them to automation applications. The presentation will show different bionic components developed by Festo that today can be found in commercial robotic solutions. (Beverages will be provided.)

Festo will describe the innovations that went into the mini-H gantry EXCM.

When does it make sense to move away from the proliferation of desktop lab robots and towards more customized, high speed handling systems used in other industries, such as packaging and electronics assembly? Learn from two companies – Hettich and LGC – about how they collaborate with Festo to implement intuitive automated solutions. Wolfgang Trautwein, MedLab Business Manager, will lead the discussion. (Lunch will be provided)