A new novel from debut author N Jay turns the light on the ancient healing techniques of Nyas. 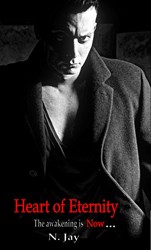 A Brave and Unusual Book.

New novelist N Jay has dared to step away from the safe genres of vampires and fairies with a groundbreaking novel which delves into the world of Nyas healers.

Taking inspiration from real life events Jay’s novel, Heart Of Eternity, weaves a tale of hope, love and ultimately redemption. The novel centres on a young woman diagnosed with terminal cancer and her unwavering belief in the power of the universe as the ultimate healer.

“We were delighted to be presented with this novel,” said Sarah Luddington, Mirador Publishing’s Commissioning Editor. “It’s a very unusual book and N Jay is a brave author for daring to tread her own path and avoiding the endless Twilight variants.”

Mirador are well known for supporting new authors and they are very proud to be offering Jay’s debut novel to the public.

Jay has drawn on her personal knowledge and experiences to present a story that is both heartbreaking yet life affirming.

“I meditate and have witnessed the power of the Nyas the art of healing,” said Jay. “I know someone very close to me who is a healer and the healing light metaphysical aspect of the book is also inspired by Nyas.” At its core though this is a passionate love story which explores a relationship between two people, one of whom carries a dark secret.

“The universe encapsulates both curative and destructive forces,” continued Jay. “I certainly believe that a rare few among us have a natural affinity for the dark side itself.”

The author herself however remains a person of mystery, refusing to divulge her true identity. Rumours are already beginning to circulate speculating on just who hides behind the enigmatic N Jay.

“Jay wants her writing to stand on its own merit,” said Sarah Luddington. “She is an intensely private person who is determined to keep her personal life her own.”

Despite her attempts to remain off the radar Facebook, Twitter and other social media sites are already buzzing with news of this long awaited book.

Heart of Eternity is available now in all good bookshops and online outlets in both paperback and all major eBook formats.

N Jay can be contacted via her Publisher.

Heart of Eternity is published by Mirador Publishing.

Mirador can be contacted via their website at http://www.miradorpublishing.com.