Drunk Driving Vs. Distracted Driving: Which Poses A Bigger Threat?

In a comprehensive report, DUI attorneys from Ankin Law Office compare the open bottle to the lit smartphone screen to discover which is more deadly for drivers. For teens, it’s the latter. 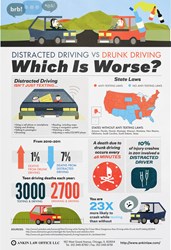 The truth is, at any given time during the day around 660,000 drivers are speeding down the road while using a cell phone. The threat this poses to everyone on the road is very, very real.

Drinking and driving kills 2,700 teens in the U.S. every year, according to an in-depth report released today by Ankin Law Office. Texting while driving kills 3,000. These statistics make up only part of a larger, more gruesome picture and they highlight the fact that both drinking and texting can have deadly consequences for drivers.

Public health advocates and concerned citizens have been fighting to reduce the rates of drunk driving for decades, but texting, app use and other smartphone activities are a relatively new phenomenon and their effects aren’t yet fully understood by the public.

“We’ve come to take drunk driving very seriously in the U.S., but many people still view texting while driving as a much smaller problem,” says Howard Ankin, attorney and owner of Ankin Law Office. “The truth is, at any given time during the day around 660,000 drivers are speeding down the road while using a cell phone. The threat this poses to everyone on the road is very, very real.”

That threat is even more serious for teenage drivers. In fatal accidents involving drivers under the age of 20, 11% were reported as distracted by devices like cell phones when the accident occurred. Among drivers aged 15 to 19, 21% were distracted by cell phones at the time of their crashes. Despite these statistics, half of high school students admit that they text behind the wheel.

“Despite the strong support for these laws, the laws and the punishments for breaking them are different from state to state,” says Ankin. “That’s why it’s important that drivers know the laws in each state – so they can be safe and protect themselves at the same time.”

The report is available in full and accompanied with a detailed infographic on the Ankin Law Office website. To read the full report and access a code that allows you to repost and share the infographic online visit http://www.ankinlaw.com. To schedule an interview with Howard Ankin, email alaynafrankenberry (at) gmail (dot) com