PROSHRED recently held its 2013 Annual Conference in Kansas City, MO. The conference allows those in the PROSHRED system to discuss the year’s results and the company’s overall vision as well as map out new opportunities for 2014 in operations, sales, and marketing. 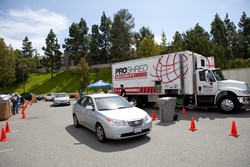 Earth Day 2013 Community Shredding Events Across the US

We are proud of all of our franchise owners and employees across the system. These awards are the culmination of the dedication and drive it takes to succeed.

This year PROSHRED presented a record of 16 awards to its franchisees and corporate locations.The night’s most prestige award, was given a new name, the 'David Wright Award of Excellence', in recognition of a great former franchisee who epitomized what PROSHRED is about, five-star client service, honesty, integrity, helping one’s fellow franchisee and contributing to the growth of the system and brand.

Todd Hoover and Desiree Chiles of PROSHRED San Diego won the prestigious 2013 “David Wright Award of Excellence”, previously the “President’s Award”, showing strong annual growth in scheduled revenue, compliance with ISO 9001, dedication to PROSHRED sales and marketing programs, as well as being an ambassador for the company and the brand.

The PROSHRED San Diego team has been leading the way with the deployment of hard drive destruction services, partnering with local green initiatives, volunteering their time, facility, and trucks to new media initiatives that help everyone in the system grow their sales results. Desire Chiles, co-owner of the franchise stated that she was “extremely proud of all her San Diego team members for going that extra mile every single day, bringing a positive attitude and putting in a lot of hard work. We are extremely honored to receive this award and are inspired by it and look forward to doing even better in 2014!”

The “Growth Award” for an outstanding year in new business development went to the franchise locations in Indianapolis, IN and once again to Chicago, IL. This award is bestowed to franchisees who have achieved the highest absolute annual revenue growth in comparison to other locations in their category.

Ken Carite, the owner of the PROSHRED Indianapolis franchise was thrilled to win this award. Mr. Carite said that “the team in Indianapolis is honored to be recognized for our growth during 2012. As we strive to meet or exceed our clients’ needs in every interaction, we believe this recognition reflects the hard work of each team member in providing the highest level of customer service and satisfaction to our clients.”

Rodney Quasny, owner, and Jim Erickson, partner, of Chicago and winners of the 2011 President’s Award, are pushing their location ahead of the system in a number of benchmarks. Mr. Quasny said that “the results were accomplished and awards were received due to the extra effort and dedication of my great team here at PROSHRED Chicago. We take pride in providing extraordinary service which hopefully will generate additional awards in the future.”

PROSHRED Chicago also won the “Scheduled Revenue Award” and the “Milestone Award” in annual revenue. Jim Erickson accepted the awards with Mr. Quasny with enormous enthusiasm, “all of our trials and successes are reflected in these awards. Chicago is a massive market, you really have to remain diligent and work hard through the competitive landscape. I know our entire team is part of these awards and we’re extremely proud of them.”

PROSHRED Kansas & Missouri, the host of the conference, won the “Milestone Award” as well as the “Sales Consultant of the Year” award for Brenda Fletcher. Todd McCullough, owner and president of the Kansas City location commended Mrs. Fletcher by saying that “she’s regularly referred to as ‘the Shred Lady’, consistently goes over and above her client’s expectations and ensures she maintains close relationships with them.”

The 2013 “Sales & Office Coordinator of the Year” award went to Lisa Fritz of PROSHRED Springfield in Massachusetts. Joe Kelly and Barry Sanborn, the franchise owners who also won the “Milestone Award”, congratulated Fritz for the award saying that “Lisa is dedicated, loyal and has an extremely good work ethic. She is an inspiration for her staff and others in the office, and she continually strives to improve the level of service by making recommendations that would improve overall sales and operations. She gives 100 percent each and every day she reports to work and has an understanding of everything that needs to be accomplished.”

The two other “Milestone Awards” went to PROSHRED Tampa and PROSHRED Philadelphia. Mark Macmillan, owner of the Tampa location, said it was, “extremely gratifying for me and my team to win this award. We’ve been in business for quite a number of years in Tampa and this breakthrough represents the road ahead for us. We’ll keep pushing to be the number one shredding company in our market.” While Ginny Heron-Doerr and Jim Doerr, owners of the Philadelphia location, said that, “receiving this award really goes to our drivers, sales people and administrative staff who provide quality above all else to our customers, which is really the secret behind our low customer turn-over.”

The last and final award went to Kevin Surratt of PROSHRED Connecticut for the 2013 “Customer Service Professional of the Year”. David Symonds and Lisa Cunningham, owners of PROSHRED Connecticut, stated that “Kevin won his second CSP of the year award since joining the company in 2007 simply because he does everything you could ask of a CSP and more. It’s not uncommon for clients to request him specifically for large purge projects or shred events. He is the perfect representative of PROSHRED Connecticut and we are proud to have him working for us.”

Jeff Hasham, CEO of PROSHRED, was handing out the awards and congratulating the winners, commenting, “we are proud of all of our franchise owners and employees across the system. These awards are the culmination of the dedication and drive it takes to succeed. I am inspired by all of our winners and excited for PROSHRED for 2014”.

About PROSHRED
PROSHRED shreds and recycles confidential documents and proprietary materials for thousands of customers in the United States in all industry sectors PROSHRED is a pioneer in the mobile document destruction and recycling industry. It is PROSHRED vision is to be the ‘system of choice’ and provide shredding and recycling services on a global basis. Find out more about PROSHRED as well as our calendar of free local community shredding events for the public at http://www.proshred.com.

Proshred SecurityDocument Destruction At Your Door