Scifi Publishing has brought to life the powerful story of future soldier Jake Taylor, who is forced from his farm life and thrown into a raging battle against relentless machines on a searing hot alien planet considered a death sentence where the average soldier’s the life expectancy is measured in days. 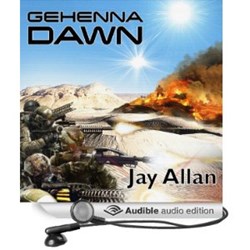 About Gehenna Dawn
Book One of Portal Wars, the new series by the author of the bestselling Crimson Worlds series.

Jake Taylor was a New Hampshire farm boy who wanted nothing more than to marry his girlfriend, work on the farm, and maybe one day write a great novel. But mankind was fighting the alien Tegeri and their bio-mechanical cyborg soldiers, and UN Central needed men, men to go to war on hostile worlds far from home.

Jake wasn't given a choice, not a real one. He found himself torn from home and family, conscripted for life and shipped to the planet Erastus to take his place in the battle lines, never to return. Erastus was a sweltering inferno, called Gehenna by the condemned men sent to fight there. In the blasted deserts and steamy jungles of this alien hell, Taylor and his cybernetically-enhanced comrades fight their never-ending war.

As Jake survives battle after battle, he rises steadily through the ranks, giving all to the desperate fight to save Earth. But endless combat in hell carries a cost, and Taylor feels his faith slipping away. He begins to question much of what he's been told, things he'd believed all his life, and the more he learns, the greater his disillusionment grows. He can feel the madness building inside him, slowly taking control.

But when he discovers the ultimate betrayal, a secret more horrific than anything he'd ever imagined, he must decide who is the real enemy and how to contain the fury and lust for vengeance that threatens to consume him. How far will he go to destroy the true evil and right a horrendous wrong? And if he does what he must to prevail against overwhelming odds and win the final victory, will be become the very thing he has sworn to destroy?

He writes science fiction with military themes, but also other SF and some fantasy as well. He enjoys complex characters and lots of backstory and action. Jay believes world-building is the heart of science fiction and fantasy, and since that is what he’s always been drawn to as a reader, that is what he writes. Among other things, he writes the bestselling Crimson Worlds series. You can join his mailing list at http://www.crimsonworlds.com for updates on new releases.

About Sci-Fi Publishing
Sci-Fi Publishing enables authors to bring their work to life, creating powerful audiobooks for Sci-Fi fans. We partner with authors from audiobook production to marketing so they can continue to focus on their passion, creating new and amazing worlds.