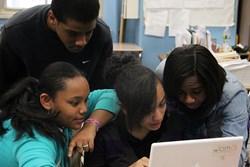 Advertisers have to get their message across quickly and clearly. Unfortunately, this often means they rely on popular gender and racial stereotypes, and teens must learn to be critical of those messages.

As Americans huddle around their television sets to watch the Denver Broncos take on the Seattle Seahawks in Super Bowl XLVIII on February 2, many will be taken in by the outrageous, multi-million dollar commercials that traditionally air during the game. But for thirty-five teens attending the “Break the Super Bowl” party held by New York City-based nonprofit The LAMP (Learning About Multimedia Project) on game day, the commercials are an opportunity to speak out against stereotypes in media, criticize below-the-belt marketing techniques and demand responsibility from an advertising industry largely regulated only by itself.

With broadcasters like Fox reportedly seeking as much as $4 million for a thirty-second spot during the game, producers leave little to chance in ensuring that their commercial is talked about long after the confetti falls on Sunday night. “Advertisers have to get their message across quickly and clearly,” says D.C. Vito, the Executive Director for The LAMP. “Unfortunately, this often means they rely on popular gender and racial stereotypes, and teens must learn to be critical of those messages, rather than take them at face value.” Participants will also learn valuable 21st-century learning skills in critical thinking, communication and collaboration, as well as information, media and technology skills.

Using video editing tools like The LAMP’s Media Breaker, teens will overlay text, audio and other media onto actual Super Bowl commercials, so that the remixed version of the commercial is criticized or parodied. Pro-bono lawyers work alongside makers and educators in ensuring that all broken commercials adhere to fair use guidelines before they are posted online for the public. This method of activism and expression, sometimes referred to as culture jamming, has been a cornerstone of LAMP programming since its earliest workshops in 2007.

The LAMP has been holding Super Bowl parties for remixing commercials since 2011, but this is the first year in which teens will directly participate. It is also the first year that will include teens participating from partner sites in Chicago and Pittsburgh. During the New York event, the game will be projected live and teens will be offered various challenges to keep them motivated throughout the game. Prizes for the winners of these challenges as well as food for the evening have been donated by local event sponsors.

Teens and groups not in New York, Chicago and Pittsburgh are encouraged to participate as well, and should email mediabreaker(at)thelampnyc(dot)org with questions or visit http://m.commit2act.org/action/break-the-media. Videos from the event will be posted on YouTube at youtube.com/thelamplatoon, and tweeted from @TheLAMPNYC and @TheMediaBreaker.

Why Do I Need to Understand Fair Use? A LAMPlit Resource Guide