A new national survey commissioned by Best Friends Animal Society (http://www.bestfriends.org) reveals that 84 percent of those polled believe that local, state or federal governments should not infringe on a person’s right to own whatever breed of dog they choose. This survey, conducted by Luntz Global, is consistent with a growing trend by many state and local governments that have repealed Breed Discriminatory Legislation (sometimes known as Breed Specific Legislation or BSL) and enacted behavior-based, breed-neutral dangerous dog laws. 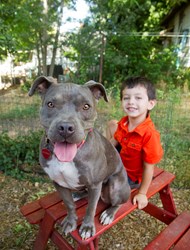 An estimated 5 to 7 million pit bull terriers live as pets in the United States.

Everyone benefits from a safe society – both people and pets. But instead of punishing innocent dogs for resembling a specific breed, communities should concentrate on holding reckless owners accountable and responsible.

A new national survey commissioned by Best Friends Animal Society reveals that 84 percent of those polled believe that local, state or federal governments should not infringe on a person’s right to own whatever breed of dog they choose.

This survey*, conducted by Luntz Global, is consistent with a growing trend by many state and local governments that have repealed breed discriminatory provisions and enacted behavior-based, breed-neutral dangerous dog laws. Of the 850 polled, 59 percent were dog owners. Only four percent of those polled believed the federal government should dictate what breed of dog a person could own, while six percent supported state government restrictions and 11 percent local government limits.

Supporting the survey is the fact that 17 states have passed laws that prohibit cities and counties from banning or restricting dogs because of breed. Even the American Bar Association passed a Resolution 100 in August, 2012 calling for all political subdivisions to repeal breed discriminatory provisions. (http://www.abajournal.com/news/article/pit_bull_bias_aba_house_oks_resolution_urging_breed-neutral_dog_laws/) Bills to prohibit breed discrimination by local governments are pending in Washington, Missouri and South Dakota. A bill is set to be introduced in Utah in the coming weeks.

“Every American who follows the right safety rules as a responsible dog owner should be allowed to own whatever breed of dog they choose,” said Ledy VanKavage, senior legislative attorney for Best Friends Animal Society. “Communities should be protected against any dangerous dog, no matter the breed, and abused or neglected dogs should be protected from abusive owners. Owners and dogs should be judged on their behavior.”

“This movement away from breed discriminatory legislation--sometimes called ‘breed specific legislation’ or BSL-- is based on studies and experience that demonstrate that laws targeting dogs based solely on breed are ineffective in reducing dog bites,” VanKavage added. “They also are arbitrary, difficult and expensive to enforce, violate basic property rights and ultimately punish responsible dog owners and innocent family pets.”

“We all want safe and humane communities,” VanKavage said. “Everyone benefits from a safe society – both people and pets. But instead of punishing innocent dogs for resembling a specific breed, communities should concentrate on holding reckless owners accountable and responsible. The simple truth is that breed discrimination doesn’t work.”

Studies in a number of countries with breed-discriminatory laws show that breed simply is not a factor in the frequency of dog bites. Because of this, more and more jurisdictions are enacting comprehensive breed-neutral ordinances that focus on the ensuring the proper behavior of both dogs and owners.

According to the National Canine Research Council and an October, 2010 report in the Journal of the American Veterinary Medical Association (JAVMA), studies done in the United Kingdom, Spain, Italy and the Netherlands found that breed discriminatory laws in those countries didn’t reduce the number of dog bites or improve public safety. (http://nationalcanineresearchcouncil.com/uploaded_files/tinymce/NNB%20now%20available%20in%20JAVMA%20dated.pdf)

Based on these studies and concerns about due process and property rights infringement, the National Animal Control Association, the American Veterinary Medical Association, Best Friends Animal Society, the ASPCA, and the Humane Society of the United States are against breed discrimination.

The Centers for Disease Control (CDC), based on its September, 2000 study of human fatalities from dog bites, published in JAVMA, also promotes a breed-neutral approach to legislation. The CDC found that many other factors, besides a dog’s breed such as reproductive status, heredity, sex, early experiences, socialization and training, can affect the likelihood that a dog could attack someone. (http://avmajournals.avma.org/doi/abs/10.2460/javma.2000.217.836)

According to statistics posted online in February, 2013 by the American Temperament Test Society, 86.8 percent of American Pit Bull Terriers successfully pass their temperament evaluations—a higher passing rate than many other popular breeds such as Golden Retrievers, Cocker Spaniels, Collies, Boston Terriers and Dachshunds. Out of 32,438 dogs tested since the organization was founded in 1977, the average passing rate for all breeds is 83 percent. (http://atts.org/breed-statistics/)

*Luntz Global conducted 850 interviews with men and women between the ages of 18 and 65+. The results of the survey have a margin of error of +/- 3.4 percent.

About Best Friends Animal Society®
Best Friends Animal Society is the only national animal welfare organization focused exclusively on ending the killing of dogs and cats in America's shelters. An authority and leader in the no-kill movement since its founding in 1984, Best Friends runs the nation's largest no-kill sanctuary for companion animals, as well as life-saving programs in partnership with rescue groups and shelters across the country. Since its founding, Best Friends has helped reduce the number of animals killed in shelters from 17 million per year to about 4 million. Best Friends has the knowledge, technical expertise and on-the-ground network to end the killing and Save Them All®.

Many breed discriminatory laws are aimed at pit bull terriers, one of the most popular dog breeds in the United States.