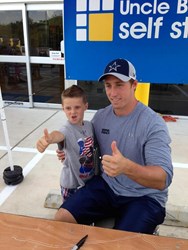 Dallas Cowboys fans will get a chance to meet the team’s star linebacker Sean Lee. Lee will meet fans and sign autographs from 1:00-3:00 pm local time on Saturday, February 8th at the Uncle Bob’s self storage facility at 5575 Davis Boulevard in North Richland Hills, TX 76180.

This will be Lee’s second appearance at an Uncle Bob’s – his first visit in San Antonio brought in more than 400 eager fans.

“Sean was amazing the last time he visited us, so we wanted to give more Cowboys fans the chance to meet him,” said Kevin Bagwell, area manager for Uncle Bob’s Texas storage facilities. “We know how much the Dallas/Ft. Worth community loves their Cowboys, and we’re just as excited as the fans for this event.”

As an added bonus, the event will also play host to the Ultimate Fan Cave Grand Prize drawing. Uncle Bob’s and the Cowboys ran a weekly trivia contest on Twitter during the NFL season, and 11 finalists emerged from the contest. The finalists will visit Uncle Bob’s on February 8th, and each will be given a key. Only one key will unlock the storage unit that contains the Ultimate Fan Cave prize pack, which includes a 55" LED TV, team merchandise and more.

“We knew Cowboys fans loved their team, but we were still taken back by how many people entered the contest,” said Chris Laczi, marketing director at Uncle Bob’s. “It’s been fun seeing the contest unfold, and whoever opens the storage unit will have an incredible set up for watching the Cowboys next year.”

For more information on the event, visit the event page at UncleBobs.com/Lee.

About Uncle Bob’s Self Storage