Is 2014 the Year of the Area Rug? Kalaty Rug Corporation Comments 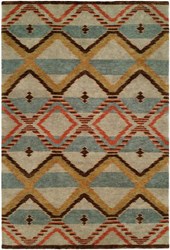 Ethnic area rug designs are a trend for 2014 according to interior decorators.

The 2014 trends allow homeowners to incorporate patterns and colors on a palette of neutral walls and minimalistic accent pieces; eliminating clutter and encouraging imagination and innovation.

As January comes to a close, the latest 2014 trends for interior decorating have been defined and home fashionistas have already begun implementing some of the latest fashion forward style suggestions. Kalaty Rug Corporation comments on three of these trends providing tips on how homeowners can embrace these style changes.

The high fashion shows that filled this first month of 2014 have been filled with rug themes. Woven rugs served as a runway for the Valentino’s men’s fashion show, Paul Smith hosted his show in a rug shop in London with a circle of Persian rugs, and Bruno Frisoni featured a Persian carpet floor covering for his shoe show where several of his shoe designs were created with large weave patterns.

It begs the question: are area rugs the new fashion inspiration and home decorating trend for the year? The trends for 2014 include:

1. White Walls and Accent Pieces
According to Los Angeles-based designer Betsy Burnham, white walls are coming back, allowing for color to pop with bright upholstery, accessories, area rugs, and art.

Mike Kalaty, interior decorating specialist of Kalaty Rugs, says an interior area rug can define a room based on the color selection. With white walls trending in 2014, a room turns into a canvas that a homeowner can add their own flair to and consistently change with the season and their mood. Less is still more in 2014 so a de-cluttered defined space will allow homeowners to pick a few favorite pieces to decorate with.

Kalaty offers several rugs out of their modern collection that would pair perfectly with white walls. The Inspira and Origins collections are two of the most popular.

2. Radiant Orchid
This year, the Pantone Color Institute, the international color authority, has announced the color of the year is Radiant Orchid. According to a news release by Pantone, the idea behind Radiant Orchid is “an invitation to innovation… to encourage expanding creativity and originality.”

Kalaty offers custom rugs that can be designed in purple hues to add a vibrant color into a home. Mike Kalaty suggests adding an orchid area rug to an office space or child’s room to add inspiration, spark imagination, and promote confidence. “2014 is really going to be the year of “statement” colors on a white backdrop,” said Kalaty. “Adding pops of color will make your rooms feel modern, yet if done correctly very comfortable.”

3. Ethnic
The interior decorating community is throwing around the word “ethnic” for 2014. What does this mean for design and decorating for the year? Colorful ethnic fabrics and textures will bring sophistication and elegance in the home. Homeowners can incorporate this trend with designer area rugs and fabrics.

Home owners can achieve the ethnic look with rugs from Kalaty. Mike Kalaty suggests exploring the Soumak and Mojave collections that feature artful geometry and tribal and Southwestern patterns. The rugs combine a traditional ethnic look with fashionable colors and motifs.

The Kalaty verdict is: area rugs are in. The 2014 trends allow homeowners to incorporate patterns and colors on a palette of neutral walls and minimalistic accent pieces; eliminating clutter and encouraging imagination and innovation.

Check out all of Kalaty Rug Corporation’s rug collections: http://kalaty.com/rugcollection.htm.

About Kalaty Rug Corporation
Kalaty Rug Corporation is a family business that has been setting the gold standard for area rugs for generations. Highly respected for its superior quality handcrafted rugs, the company has built a reputation for its ability to combine color and design to create a broad range of area rugs that portray “Tradition for Today.” Kalaty operates showrooms in New York City, Atlanta and High Point. Visit us online to find a local dealer of Kalaty rugs.