Aristatek, Inc, a leading provider of hazardous materials planning and response solutions, has prepared a written brief detailing the consequences of toxins in smoke plumes from spilled crude oil in response to the numerous railcar disasters that have recently taken place in the United States and Canada. 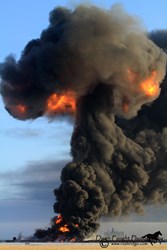 We felt analyzing this threat could help emergency managers and responders make more informed decisions during planning, training and response for these types of accidents since there are no green pages associated with crude oil in the ERG.

The company will make this brief available at no cost to Hazmat teams, fire departments/fire marshals, sheriffs, LEPC/EMA officials or any other public safety/health professionals to assist in their responsibility to protect their communities. The document is available to those that visit the Company’s web site at http://www.aristatek.com.

According to the American Association of Railroads, carloads of crude oil transported by rail was forecast to increase by over 70% from 2012 to 2013. Several high-profile accidents in 2013 have highlighted the inherent dangers this substance can present, especially those effluents produced by burning crude oil. The title of the brief is ‘Toxic Consequences of Smoke Plumes from Crude Oil Fires’ and analyzes these effluents.

As crude oil burns, the resulting smoke contains chemicals which are harmful to humans if exposed to critical concentrations. Formaldehyde, carbon monoxide, benzene, sulfur dioxide and particulates are the major effluents found in the smoke as reported in technical literature and are analyzed in the brief. The brief points out that in addition to the isolation and initial evacuation zones recommended by Guide 128 of the 2012 Emergency Response Guidebook (ERG) from the Department of Transportation, emergency planners and responders may need to consider taking protective action downwind from a crude oil fire involving a railcar.

“During a train derailment involving crude oil, the immediate threats responders worry about the most often are the vapor cloud explosions and pool fires. But another threat are the toxins emitted in the smoke plume for folks that are downwind from the accident,” continues King. “We felt analyzing this threat could help emergency managers and responders make more informed decisions during planning, training and response for these types of accidents since there are no green pages associated with crude oil in the ERG.”

The brief shows that the quantities of these combustion by-products vary and have different levels of toxicity. AristaTek’s analysis treats each substance individually by first calculating an expected total amount of each that would be given off for two different amounts of crude oil burned (30,000 and 10,000 gallons).

As an example of the brief’s methodology, formaldehyde can be produced at a level of 139 mg per kg of crude oil burned, while carbon monoxide can be produced at 30,000 mg per kg of crude oil burned. An average release rate is calculated based on the fire lasting an assumed 4 hours. Since each substance has a different toxicity level, the downwind protective action distance for each substance is calculated using the company’s PEAC-WMD software, the world’s leading hazardous materials technical reference and modeling software, using an assumed set of meteorological conditions to predict that substance’s potential consequence on individuals downwind. Some substances were found to have relatively small protective action distance (formaldehyde at 600 feet) and others have larger protective action distances beyond the half-mile recommended by the ERG (sulfur dioxide at 1.2 miles).

Also included in the brief are the signs and symptoms of exposure to these effluents for reference by responders.

This latest technical brief from AristaTek is a follow-up to their popular brief titled ‘‘Ammonium Nitrate Estimated Blast Effects’ released in September 2013. That brief was prepared for the Texas State Fire Marshal’s office then later released to public safety officials.