The Core of Bad Apples: PsychTests.com Study Delves Into the Minds of Power-trippers

A study conducted by PsychTests.com reveals the traits that make people more vulnerable to an abuse of power. 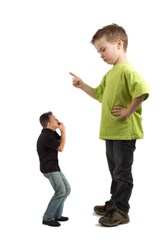 Making others feel small may boost power-trippers' ego, but it also damages personal and professional relationships.

What a lot of people don’t realize is the fact that when you pull rank to make sure people do what you want them to do, you lose some of that power.

If there’s anything that superhero movies teach us, it’s that bad guys (and sometimes even good guys) can become dangerous when given too much power. There are people, like Nelson Mandela, who use their influence to create positive changes. And then there are those who use power as a means to their own self-serving end.

Some traits, according to PsychTests researchers, can potentially pre-dispose people to abuse power, particularly:

This hunger for power and control has its consequences. A study conducted by PsychTests using their Dominance Test reveals that “power trippers” are more likely to have problems in their professional and personal relationships (and to have a relationship end due to their excessive need for control), to be less satisfied with their job, and to see power as important, if not crucial, to their success. Why? Those who are power-hungry believe that being in a position of power will improve their life.

“If given a position of authority, power trippers think that they will get the respect and social status they feel they deserve,” explains Dr. Ilona Jerabek, president of PsychTests. “In fact, 62% of people in our sample believe that being in a position of power will change their status and greatly improve their life. This could be the case for some people, but it depends a great deal on their personality. Some people will use power to make a difference that benefits a lot of people. Self-serving people use their influence over others as a way to boost their ego. Power is a tool that when used the wrong way, will do a lot of harm.”

Attitude toward power, it seems, plays a major role in how a person will wield it. When comparing people with a self-serving view to those who believe that it is something that should be used responsibly, PsychTests’ research reveals surprising differences:

“Being in a position of power doesn’t make you a leader; it doesn’t give you charisma,” says Dr. Jerabek. “And what a lot of people don’t realize is the fact that when you pull rank to make sure people do what you want them to do, you lose some of that power. They may very well follow your orders, but will do so grudgingly. So the moral of the story, or this study, is if you have power and want to keep it, use it sparingly, when it really matters, and for the good of the whole.”

Those who wish to discover their power profile can go to http://testyourself.psychtests.com/testid/2117.

HR managers interested in using this or other pre-employment tests can visit http://www.archprofile.com.