The goal is to eventually have a volunteer End-of-Life Doula resource network in every county. Stirred by her experience as a hospice and oncology nurse, Suzanne B. O’brien RN has launched a free training program to support dying patients and families with care at home. 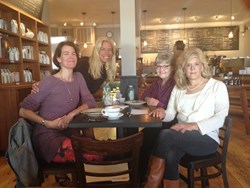 9/10 people polled want to be kept at home if terminally ill.

End of Life Disconnect: A National Hospice Organization Gallup Poll found that nine out of ten people who were terminally ill wanted to die at home, yet half were dying in the hospital. The same poll found that the number one fear of the dying patient was becoming a burden to their family.

“Because of our society’s overwhelming fear of death, it is almost impossible to teach families how to fully care for their dying loved ones,” said O’Brien. “Compounding that is the short amount of time the patients spend at home.” In fact, another study found that seven out of ten families said that they felt they were referred to hospice too late . “We have literally become paralyzed by the topic of death, and this fear is making the experience so much harder than it needs to be for both patients and families,” observes O’Brien. “Planning for end of life wishes and discussing them with loved ones takes a great weight off of both patients and families.”

O’Brien got the idea for End-of-Life Doulas during a Hospice volunteer trip to Zimbabwe, Africa, in September, 2012. Because the hospice there has a great need and limited resources, the hospice workers teach a neighbor how to care for a dying patient and their family through that last phase of life - like a Doula. Doula is a Greek word meaning a non-medical person trained to care for someone physically, emotionally, and spiritually. It is usually associated with the birth of a baby. “I have always drawn the analogy between new life entering this world and the phase of life leaving this world. Both require special love and preparation,” said O’Brien.

O’Brien endorses this model of community taking care of community. Having worked with so many people from all different cultures and backgrounds, O’Brien appreciates that people across the world are more similar than different, and recognizes that everyone will need care and support when the time comes. “Death is inevitable,” says O’Brien, “but with the right education, kindness and compassion, we can help one another through this natural part of our life’s journey.”

About Death Cafe
The Death Café movement, started in 2011 by Jon underwood of London, England is now a powerful global movement (The New York Times featured the NYC Death Café in June, 2013). The cafes are a safe environment where people can share thoughts, questions, and philosophies about death and dying.

About Suzanne B. O’Brien
O’Brien is a Hospice and Oncology Nurse in New York. O’Brien facilitates Death Café Millerton, NY, and started Boston Death Cafe this January and Death Cafe Dutchess County N.Y. coming in March. She has begun to train End-of-Life Doulas throughout the country with the hope of eventually having a volunteer End-of-Life Doula resource network in every county.

Working in a clinic in Zimbabwe, Africa