Teens at NYC-based Nonprofit The LAMP's "Break the Super Bowl" Party Use Commercials for 21st-Century Learning, Activism, Fair Use Education 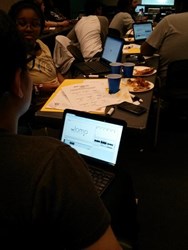 "It was a really different way to watch the Super Bowl and all the ads, and I don't think I'll watch them the same way ever again."

While the typical Super Bowl party includes a wide-screen TV and a bucket of hot wings, one Super Bowl party in New York City had something a little different: laptops transformed into video editing consoles. The event was Break the Super Bowl, run by NYC-based education nonprofit The LAMP, and the attendees were teens from the McBurney YMCA and the surrounding Chelsea neighborhood. Throughout the evening, participants were challenged to hone their media literacy skills by remixing and deconstructing Super Bowl commercials as they aired, ultimately creating original works of video criticism.

"It was a lot of fun," said one of the teens. "I felt like I was part of the game because I got to go in and rework the commercials. It was a really different way to see the Super Bowl and all the ads, and I don't think I'll watch them the same way ever again."

"I hadn't ever really paid that much attention to the commercials," said another teen who participated in the event. "I thought they were funny, and didn't take them seriously, but now I see how they can really change the way people think."