Robinson fought for respect with every weapon he had. During a time when too few African-American voices shouted for justice, Bill Robinson’s whispers were heard by presidents, governors, kings, queens, and countless others. 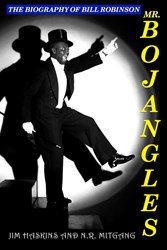 Bill Robinson – “Mr. Bojangles” – is a name synonymous with tap dancing. He invented the “stair dance,” starred in movies and on Broadway, broke the color barrier for dancers in vaudeville and performed for kings and presidents. His career in American dance was unprecedented. Even today, those unfamiliar with his work know his name from the song “Mr. Bojangles” and Fred Astaire’s classic dance routine “Bojangles of Harlem.” And if you’ve ever used the word “copasetic”, you can thank Robinson – he coined it.

With access to much primary source material – people who knew Bojangles, his scrapbooks and his personal papers – Haskins and Mitgang create a vivid portrait of the man behind the myth, from his birth in Richmond, Virginia, to his death and the star-studded funeral where he was eulogized by Adam Clayton Powell, Jr., and Ed Sullivan.

They also address the myth that portrays Robinson as an Uncle Tom figure. This myth may have begun because of the roles he played in three Shirley Temple movies – a smiling, dancing servant. But that was the polar opposite of the real Bill Robinson.

As Mitgang notes, “Robinson was called the Mayor of Harlem. He fought for respect with every weapon he had – his charming smile, his humor, his dancing feet, his fists, and his gold plated pearl handled gun given to him by the New York City Police Department. During a time when too few African-American voices shouted for justice, Bill Robinson’s whispers were heard by presidents, governors, kings, queens, and countless others.”

In addition to his dazzling career in dance, the book documents how Robinson:

And the book doesn’t shy away from Robinson’s negative traits. As the review in Library Journal put it: “They deal squarely with Robinson's gambling and three marriages, and succeed splendidly in detailing the hardships faced by a black performer in a white entertainment world.”

In eulogizing Robinson in 1949, the Reverend Adam Clayton Powel, Jr., pastor of the Abyssinian Baptist Church in the Harlem, observed, “Bill wasn't a credit to his race, meaning the Negro race. Bill was a credit to the human race. He was not a great Negro dancer; he was the world's greatest dancer. In some way the legend got around that Bill Robinson was an ‘Uncle Tom.’ Oh, no! You didn't know Bill if you heard of that story!”