Southall Travel, one of the leading travel agencies in the UK proudly announces the company’s successive achievement on being awarded for sixth time the “Best Overall Agent Award” for the year 2012-13 by the India based full service carrier, Jet Airways. 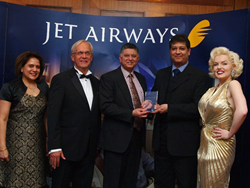 At Southall Travel, our experts listen to the needs of our customers patiently and strive to tailor the best options and offer exceptional service.

The high profile award function was held in London on 30 January 2014 and was attended by some of the prestigious personalities from the UK travel industry, with Lydia Nazareth, General Manager, UK & Ireland, and Bram Steller, Executive Vice President, International Sales, from Jet Airways. Southall Travel Group was represented by Jaymin Borkhatria, Sales Director, Southall Travel, and Rajan Sawhney, Sales Director for The Holiday Team, the business to business arm of the group. Suzie Kennedy, a look-alike of Marilyn Monroe was also present at the do. The biggest award of the event was presented by Lydia Nazareth and Bram Steller to Jaymin Borkhatria.

While accepting the award Mr. Borkhatria said, “It is a great honour to have received the coveted award for the sixth time in succession. Jet Airways is the most popular name in India and amongst the largest airlines in the region, and receiving this accolade is a great encouragement for the company.”

Mr. Borkhatria accredited the success of Southall Travel to the sterling efforts of its team of experts. “At Southall Travel, our experts listen to the needs of our customers patiently and strive to tailor the best options and offer exceptional service. Even in this highly competitive scenario, our team has successfully managed do boost Southall Travel’s popularity among its partners as well as customers”.

Jet Airways is India’s premium international carrier. The airline has its primary hub at Mumbai International Airport, India with one of the secondary hubs at Brussels, Belgium; it currently operates flights to over 70 destinations, including 20 international, across the United Kingdom and rest of Europe, USA, Asia, Far East, Middle East etc. The airline has significant presence at the UK airports and is a preferred choice of many travelling from or via British airports. Jet Airways operates its destination network with one of the youngest aircraft fleets. The carrier has been awarded with a host of national and international awards.

Southall Travel, based in Southall, Middlesex, is a popular travel agency and fast emerging as a preferred name in international travel market. With a vast network of partnerships with airlines, hotels and other suppliers, the company offers affordable flights and holiday deals across business, leisure and wholesale sectors. Southall Travel is an ABTA member and all holidays booked with the company are financially protected under its ATOL. It is listed in both, Sunday Times Fast Track 100 and Sunday Times Top Track 250 league tables. The agency operates round the clock service delivery centre that is open on all 365 days of the year, and a user friendly website that features exclusive deals for worldwide destinations which can be booked online.