The new single is presented by Coast 2 Coast Mixtapes Promotion. 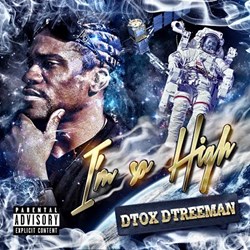 Coast 2 Coast Mixtapes announces the release of the “I'm So High” single by Dtox Dtreeman. The song is currently available for download.

Dtox Dtreeman is a rapper from Elizabeth (Eastwick), NJ. Learning to play the trumpet at age 10 and starting to DJ at age of 12, music has been a part of Dtox Dtreeman’s life for as long as he can remember. Dtox’s first experience making music was not an international one as he found himself behind the mic at his friend's studio session. Trying to rally his friend whose motivation had dwindled, Dtox hit the mic to have some fun bringing the energy back into the room but eight hooks and six songs later Dtox knew he was destined to bring back that boom bap lyricism.

Dtox Dtreeman’s latest single “I'm So High” creates a nice vibe with its jazzy classic Hip Hop beat and smooth flow. Dtox created this song as a commentary on his struggle to stop smoking, drinking, and doing drugs until one day he found himself in the emergency room with a 226 blood pressure. Smoking daily for over 10 years, Dtox had tried to quit many times but was always unsuccessful before that night he almost lost his life. If this single is any implication of the tight delivery and meaningful messages found in Dtox’s future works you will want to Keep up with this smooth emcee on his twitter page at @dtoxdtreeman.