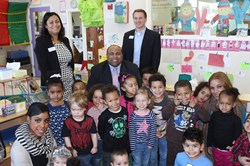 Mayor Rivera of Lawrence visited Little Sprouts to read to a group of preschool children. Rivera was invited by CEO Mark Anderegg to learn the value of early education in the Lawrence community.

As educators, we are well aware of the vast impact that we can have on children’s lives by establishing a strong early foundation. We think it is important for the Mayor & other civic leaders to see quality early education in practice.

Little Sprouts, a local leader in early education and child care, welcomed Mayor Daniel Rivera to its Lawrence school on Tuesday. Rivera participated in live teaching sessions at Little Sprouts to connect with the youth of Lawrence.

Mayor Rivera began his visit in the Lawrence preschool classroom led by Karla Cappelan and Alba Cruz. Rivera playfully read “As the Crow Flies” by Gail Hartman. From soaring like eagles to hopping like rabbits, Rivera and the children cheerfully imitated every character from the book. Laughter and smiles filled the room entirely, as the children’s faces glowed with excitement.

Once story time concluded, the students eagerly shared a book of their own: a list of recommendations to improve the city of Lawrence. Suggestions ranged from fixing their homes to receiving more toys. Improving town parking even made the list of priorities for the preschoolers. “Whenever I go anywhere, people tell me what to do. This place is no different!” Rivera said jokingly.

Continuing his journey through Little Sprouts, Mayor Rivera joined toddlers in making Popsicle stick houses. The classroom, led by Amin Jimenez and Jasmin Henriquez, was not shy about inviting him to participate. He worked alongside a small child to glue sticks to paper, an activity used to build fine motor skills. The small children, beaming and completely covered in glue, made Mayor Rivera comfortable and welcome in their classroom.

Rivera visited Little Sprouts at the invitation of Mark Anderegg, President & CEO. Anderegg was able to showcase the importance of early education in the Lawrence community. Most recently, Little Sprouts has closed the achievement gap within its schools, eliminating academic socioeconomic discrepancies. In 2013, 98% of Kindergarten-eligible low-income children enrolled at Little Sprouts tested early reading proficient, compared to only 84% of Kindergarten-eligible students reaching proficiency nationwide.

“As educators, we are well aware of the vast impact that we can have on children’s lives by establishing a strong early foundation and love of learning. We think it is important for the Mayor and other civic leaders to see quality early education in practice,” Anderegg stated. He continued, “Our hope is that, by reminding them of the importance of our mission, they will keep education amidst their list of top priorities."

In turn, Rivera was struck by the strong curriculum and passionate teachers at Little Sprouts. “I want to see what people are doing and how successful and profitable it is for us,” Rivera said. “Knowing they are committed to the city is important because it means stability for the families as a business, employer and community partner.” Little Sprouts has certainly proven that they are much more than just daycare in Lawrence, MA.

To learn more about Little Sprouts and to find a location near you, visit http://www.littlesprouts.com.