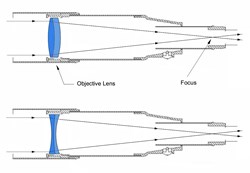 "Einstein special relativity is solely applicable to a minute segment of nature and its surpassing for broader conditions is mandatory for new scientific and technological advances." - R. M. Santilli

Light originating from matter-galaxies experiences a refraction when passing through matter-lenses for which reason Galileo's telescope uses convex lenses. Following research initiated in the 1980s at Harvard University under DOE support, Dr. Santilli has constructed a new mathematics for the characterization of antimatter, known as "Santilli isodual mathematics," permitting the new isodual physics that represents antimatter from Newtonian to quantum theories in a way compatible with all available experimental data on antimatter. The capability by a telescope with concave lenses (Fig. 1) to focus images confirms the predictions of Santilli's isodual physics according to which light emitted by antimatter is repelled by matter-gravitation and possesses a negative index of refraction when passing through a matter-lens (http://www.santilli-foundation.org/docs/Antimatter-telescope-2013-final.pdf).

The original detection of antimatter galaxies, antimatter asteroids and antimatter cosmic rays via Santilli's telescope occurred at 10.30 pm of November 7, 2013, via views of the Vega region of the night sky from the Gulf Anclote Park, Holiday, Florida, GPS Coordinates: Latitude = 28.193, Longitude = -82.786. The detection occurred via a streak of darkness in a camera set set at 15 seconds exposure (Figs. 2, 3). Santilli discovery has been apparently confirmed by a team of scientists via the use of the same pair of Galileo's and Santilli's telescopes in the same ground location and in the same region of the night sky (http://www.santilli-foundation.org/docs/Con-Ant-Tel-2013.pdf ).

"Since Einstein's's theories do not predict antimatter, it is generally believed that antimatter can only be created in particle laboratories and does not exist in the large scale structure of the universe," states Dr. Santilli. "However, Earth has been devastated in the past by antimatter asteroids, as it is the case for the 1908 Tunguska explosion in Siberia that had the equivalent of one thousands Hiroshima atomic bombs. This explosion can only be due to the annihilation of an antimatter asteroid in our atmosphere due to the lack of any debris in the grounds, as well as the excitation of Earth's entire atmosphere for days only possible under intense radiations. In the event America is hit even by a small antimatter asteroids of the size of a football, all our military, civilian and industrial communications will be disabled for days, again, due to the excitation of our atmosphere. Therefore, time has arrived to denounce organized interests on Einstein due to their documented, widespread, obstructions and disruptions of research on still unknown means of detecting antimatter asteroids for the intent of maintaining the validity of the rather limited Einsteinian theories throughout the universe against the interest by America and mankind for new basic advances." (http://www.santilli-foundation.org/docs/Antimatter-2013.pdf)

“Santilli has received numerous honors," states Mrs. Fleming,"including: the Gold Medal from the University of Orleans, France, in 1981; the nomination by the Estonia Academy of Sciences among the most illustrious applied mathematicians of all times; the prestigious Mediterranean Prize in 2007 that has also been granted to Hilary Clinton, Price Albert of Monaco, France President Nicolas Sarkozy, Juan Carlos King of Spain, and other famous people; the 2011 Nepal Scientific Prize; the Gran Cross of the St. Agata order in 2011, which is the highest honor granted by the Republic of San Marino; the Honorary Membership to the ICNAAM in 2011; the "ringing of the bell" at NASDAQ in 2012; hundreds of nominations for the Nobel Prize in Physics and Chemistry; and other honors (http://www.santilli-foundation.org/santilli-nobel-nominations.html).