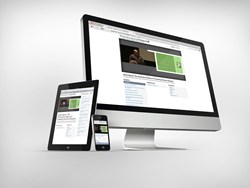 KnowledgeVision's new responsive design initiative offers a consistent experience across devices, while taking advantage of the unique capabilities of each.

KnowledgeVision Systems, the leader in online presentation technologies and tools, has announced the immediate availability of KVStudio 5.0, the latest release of the company’s award-winning tool for creating video-enabled interactive online presentations.

Among the many new features in the new release are enhanced player templates that may be used to provide a rich, consistent viewing experience on mobile and desktop devices. These enhanced templates employ advanced “responsive design” principles to detect and adapt their layout to the size, orientation, and capabilities of the device the presentation is being displayed on -- no matter what the device is.

“Online content is being viewed today on mobile and desktop browsers of every size and shape -- and each of these devices is a little different in its capabilities,” notes KnowledgeVision CEO Michael Kolowich. “Despite these differences, viewers now expect content like online presentations to be viewable anywhere, without installing special viewing software or apps. KnowledgeVision’s enhanced players deliver on that expectation.”

The new players assure KnowledgeVision customers that the content they create may be viewed by as many viewers as possible, with a rich, consistent experience.

KVStudio 5.0 is the culmination of a two-year “KnowledgeVision Anywhere” initiative, designed to bring rich, interactive, multimedia presentations to the universe of mobile devices. KVStudio 5.0 comes with more than 30 enhanced player templates that may be customized with company colors, logos, and designs. Later this Spring, KnowledgeVision will release additional tools that will make it possible for KnowledgeVision customers to tailor player designs further by modifying HTML5 and CSS code in the player templates.

“KnowledgeVision has long been known as the world’s most flexible and powerful online presentation platform,” said Kolowich. “Our enhanced, responsive templates take that flexibility to a whole new level.”

Among the other features released with KVStudio 5.0 is a new set of tools for deploying and managing large KnowledgeVision accounts.

“KnowledgeVision is increasingly being adopted by larger organizations that need to put KnowledgeVision’s tools in the hands of hundreds and even thousands of users,” said KnowledgeVision COO Allen Deary. “Over the coming months, we’re continuing to release new capabilities that make it easier to manage accounts and share presentations and assets within workgroups and across the enterprise.”

A venture-backed company based near Boston, KnowledgeVision offers a Software-as-a-Service solution that makes it easy to create, share, and track online presentations.