Released by Bitingduck Press on November 1, 2013, Phillip Gardner's collection of 18 stories, "Available Light," has attracted attention from critics and filmmakers. The book will be featured at several upcoming events in Los Angeles and South Carolina. 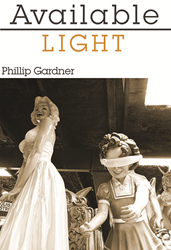 A lovely collection about love in all its forms.

Short story author Phillip Gardner, whose previous collections include "Somebody Wants Somebody Dead" (Boson Books 2012) and "Someone To Crawl Back To" (Boson Books 2003), released a new collection of 18 short stories this fall, entitled "Available Light" (Bitingduck Press, November 1, 2013). Ron Rash, author of "Serena" and "Burning Bright," says, “This new collection leaves no doubt that Phillip Gardner is in the first tier of the South’s finest short story writers. His empathetic imagination, vivid language, and understanding of what makes a memorable story are of the first order. His voice is utterly his own. 'Available Light' takes the reader beyond the realm of pain and pleasure and into the sublime.”

One of the 18 stories in "Available Light," “Brother,” has been nominated for a Pushcart Prize. It is the tale of a World War II-era Southern community uprooted by the arrival of airmen. When a teenage boy is forced to defend the young wife of his employer, only his distant brother will ever learn the truth. Goodreads' Kathleen Dandeneau says, “Every character is complex in all of these stories and the writing is genuine and beautiful. This is a lovely collection about love in all its various forms, who we are because of it, and the ways it changes us.”

“Happy Hour,” a story first presented by Liar’s League London, has been selected for a short film adaptation for presentation at the third annual Expecting Goodness Short Film Festival. Sponsored by Contec, Inc. and produced by Hub-Bub and USC Upstate, in association with the Hub City Writers Project, Expecting Goodness is a writer’s film festival. Its goal is to unite South Carolina writers and their stories with filmmakers across the state to create original short films, culminating in a June festival.

Gardner and his books will be featured in several literary festivals through the spring and into the fall. His publisher’s booth at the LA Times Festival of Books (University of Southern California, April 12 and 13) will offer all of his books in both print and electronic format. From May 16-18, Gardner will be a featured presenter at the South Carolina Book Festival at the Columbia Metropolitan Convention Center. And in October, Gardner will be a featured writer as part of the Oswald Distinguished Writers Series at the University of South Carolina Aiken.

The book is available in paperback and all electronic formats. DRM-free versions of the e-book may be purchased on the Bitingduck Press webstore. A full-service publisher handling both fiction and non-fiction, Bitingduck specializes in books with science or nerd themes. Upcoming catalogs will feature young adult titles (2014) and hard sci-fi (2015). Submissions in all genres are welcome; the submissions guidelines are found on the publisher site.