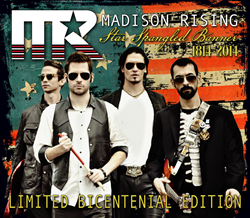 I would encourage anyone who questions our patriotism, love of country and respect for our military to watch our official Star Spangled Banner video (http://youtu.be/c8C7i9kdEf8) and then make up their minds about what they think about us.

Madison Rising, America’s most patriotic rock band, has come under fire for its National Anthem performance at yesterday’s NASCAR race broadcast live on ESPN, with some people calling the performance “disgraceful,” and “disrespectful” of our flag and our military. The band however has another explanation – the crowd just wasn’t expecting to hear a non-traditional rendition.

“In my opinion, the controversy in Daytona is simple,” said Richard Mgrdechian, manager of Madison Rising. “People were expecting a conventional presentation, but they got something completely different. Had they been familiar with our version, I have no doubt that the reaction would have been the typical resounding round of applause that we’ve gotten at hundreds of other performances, and that everyone would be talking about what a great and inspiring rendition it is. Back when were recording it, we had one very specific goal in mind - to reenergize that song for the 21st Century (and in time for the 200 year bicentennial on September 14, 2014), and to do it in the most respectful and reverent way possible. Since then, hundreds of thousands of people have told us in no uncertain terms that we achieved that goal with flying colors. It’s unfortunate that so many of the people in yesterday’s crowd were not yet familiar with who we are or what we do.

“I would encourage anyone who questions our patriotism, love of country and respect for our military to watch our official Star Spangled Banner video (available on YouTube at: http://youtu.be/c8C7i9kdEf8) and then make up their minds about what they think of us,” said Madison Rising lead singer Dave Bray, a navy veteran and former 8404 FMF Corpsman. “Over five million people have gone into it not knowing what to expect, but the vast majority have come out with goose bumps, tears in their eyes and our version downloaded onto their iPods to listen to every day. The mission of Madison Rising is to help restore a sense of pride back into this country, and we're thrilled it’s having that effect.”

Madison Rising released its widely acclaimed version of the Star Spangled Banner eighteen months ago and both the song and video have become huge hits throughout the country, catapulting the band into the national spotlight and creating one of the most loyal fan bases in rock music history. “Awesome,” “deeply moving,” “chilling,” and “the best ever,” are just some of the superlatives used to describe Madison Rising’s rendition of the song that celebrates what being an American is all about.

Last November, Madison Rising released their second album – American Hero – dedicated to the men and women of our armed forces, along with the police, firefighters and other first responders. Madison Rising is on a mission to reignite authentic American culture through great rock music. The band promotes the principles of liberty, independence, smaller government and personal responsibility, and plans to re-release a special limited Bicentennial edition of their Star Spangled Banner single within a matter of weeks. Madison Rising: Music with meaning.