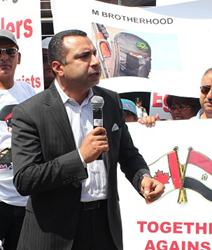 Egyptian-born human rights leader and One Free World International founder Majed El Shafie will tell his personal story of persecution and torture to FOX News Radio’s Vipp Jaswal on Sunday, March 2nd at 6:00pm EST. During the one hour interview, El Shafie will share his journey from Islam to Christianity and discuss the growing problem of religious persecution around the world.

El Shafie regularly testifies before the U.S. Congress and the Canadian Parliament and Senate, and he's a frequent guest on news outlets worldwide, including the Mike Huckabee Show, Phil Valentine, Laura Ingraham, CBN News, TheBlaze TV’s Glenn Beck, CBC, Sun News Network’s The Arena with Michael Coren and The Source with Ezra Levant, CTV News and many more. He now resides in Canada and fights for those persecuted around the world through his human rights organization, One Free World International. Pressuring governments, and challenging both world and spiritual leaders, he has not been afraid to put everything on the line to help those in need.

El Shafie has a unique voice, having once been arrested, tortured, and sentenced to die in Egypt for defending human rights and fighting for freedom of religion and the rights of minorities. El Shafie’s dramatic story, and those of others worldwide who are suffering persecution, are told in shocking detail in his new book, FREEDOM FIGHTER: One Man's Fight for One Free World (Destiny Image). This is the true story of his continuing fight for a world free of religious persecution. The book is a companion to the award-winning human rights documentary, FREEDOM FIGHTER, now available on DVD from Destiny Image Films. View the official trailer here: http://www.freedomfighterdvd.com.