Caravan Rug Corp. to Showcase New Collections at The Rug Show in LA 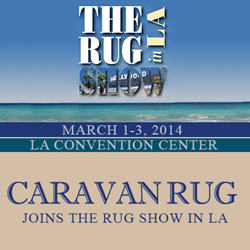 Caravan Modern... will be among the 21 prominent rug purveyors displaying their wares at the West Coast debut of The Rug Show.

Caravan Rug Corp, long one of Beverly Hills’ largest and best known rug showrooms, has announced that Caravan Modern, their modern rug brand, will be among the 21 prominent rug purveyors displaying their wares at the West Coast debut of The Rug Show, running at the LA Convention Center from March 1-3, 2014. The Rug Show was started in September 2013 with their first show at the Javits Center in Manhattan.

The Rug Show is a non-profit industry association made up of rug producers, importers and wholesalers. Their primary goal is to “better promote and expand the collective interests of our industry.” With their premier event last September, The Rug Show brought together the most important rug markets in the New York-New Jersey area and established this as one of the rug industry’s most important trade events.

Caravan has been doing business from their Beverly Hills showroom (the largest in Southern California) for more than 30 years. In that time they’ve taken a leadership role in the areas of modern designer rugs as well as traditional Oriental carpets and antiques. All of their area rugs are handmade in one of Caravan’s rug making facilities.

In addition to having the largest retail rug showroom in the Los Angeles area and an extensive online store, Caravan is also a manufacturer and distributor of fine handmade area rugs. They supply their branded creations to a large network of dealers all over the country. Caravan owns several manufacturing centers in Afghanistan, Pakistan, India and Nepal, where these rugs are handmade in the centuries-old method.