Other Winners Include Two 13 Year-Old Girls changing the world – Lillian Pravda whose non-profit, Vision for and from Children, has donated more than 24,100 eye surgeries globally. Maria Keller’s non-profit, Read Indeed, has donated more than 1 million books to under-privileged children. CBS This Morning Co-Host, Norah O’Donnell, will serve as Mistress of Ceremonies. 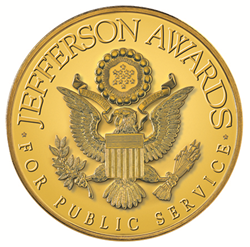 “This year’s Jefferson Awards recipients have made real and lasting differences in the lives of countless people. Their successes are to be celebrated so as to inspire others to greatness,” said Hillary Schafer, the Jefferson Awards Executive Director.

The Jefferson Awards, America’s most prestigious honor for public service, celebrates Tom Brokaw with the 2014 Lifetime Achievement Award for a lifetime of landmark work in American journalism. In his most recent book, The Time of Our Lives, Mr. Brokaw invites us to foster a rebirth of family, community, and civic engagement, something to which he has dedicated his life.

Mariano Rivera receives the Jefferson Award for Most Outstanding Service by a Professional Athlete for his work helping underprivileged children in the US and in his homeland of Panama. His work includes rebuilding schools, awarding scholarships and the creation of computer centers. Since retiring from baseball, Rivera continues to dedicate himself to improving the lives of others in his community and through his church.

Melrose Place TV star-turned social entrepreneur Andrew Shue receives a Jefferson Award for Most Outstanding Service by an Entrepreneur for his work as co-founder, along with his lifelong friend Michael Sanchez, of the national non-profit youth leadership organization Do Something, which has inspired and trained millions of young people to take action in their communities.

Recipients of the youth service award for Most Outstanding Service by an Individual 25 Years or Under are awarded to Lillian Pravda and Maria Keller.

Lillian Pravda was born blind. Through multiple surgeries, she received the gift of sight. At age 9, Lillian dedicated herself to providing that gift of sight to children who otherwise could not afford surgeries. By age 13, Lillian and her non-profit, Vision for and from Children, has gotten over 24,100 surgeries donated.

Maria Keller wants to make the world a better place, one book at a time. Maria began Read Indeed when she was 8 years old. Her goal was to distribute 1 million books to kids in need by the time she was 18. She accomplished this goal by age 13. Now she wants to distribute books to all 50 states in the U.S. and every country in the world.

“This year’s Jefferson Awards recipients have made real and lasting differences in the lives of countless people. Their successes are to be celebrated so as to inspire others to greatness,” said Hillary Schafer, the Jefferson Awards Executive Director. “Together, we are Building a Culture of Service.”

About the Jefferson Awards:
Founded in 1972 by Jacqueline Kennedy Onassis, Senator Robert Taft Jr., and Sam Beard, the Jefferson Awards honor extraordinary individuals and companies whose profound achievements and commitment to their communities are making the world a better place to live. For over 42 years, they have honored more than 50,000 individuals in grassroots communities. The Jefferson Awards has a unique network of 118 Media Partners (NBC, CBS, ABC and FOX affiliates and major newspapers) reaching into 27 million homes.