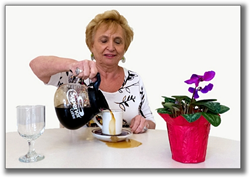 In the elderly, undetected vision problems are particularly serious because often they're the culprits behind falls — which can result in hip fractures and other medical problems.

Regents Park is working with Dr. Larry Lampert, an often-sought speaker at science symposiums and who frequently is interviewed on TV. He is one of only 540 vision rehab experts worldwide who has completed an intense fellowship through the College of Optometrists in Vision Development.

Functional vision rehabilitation is different than routine eye care in that it has less to do with 20/20 vision and the eyeball, and more to do with how people function with their vision. Undetected vision issues can be quite serious, however. They create problems with driving safety, balance (and thus falls) an inability to read anymore because words “wobble” out of line, depression and others.

The complications involve an assortment of unfamiliar terms such as convergence insufficiency, binocularity problems, visual midline shifts and impaired peripheral vision. Those difficulties can even occur after strokes or concussions, to name but a few.

In the elderly, undetected vision problems are particularly serious because quite often they're the culprits behind falls. In fact, by the age of 60 some 43 percent of people have what's known as “weak eye teaming skills,” which means their eyes do not work well in harmony. That affects reading and depth perception, and an increased risk of falls due to resulting judgment problems.

In addition to his work with the elderly, Dr. Lampert also works with children. He likewise also brought his techniques to professional athletes, including Olympic contenders, PGA and LPGA golfers, USTA tennis players, the Minnesota Twins and St. Louis Cardinals, as well as players from the New York Yankees, Chicago Cubs, Cleveland Indians and Miami Dolphins.

Dr. Lampert, who specializes in stroke and head injury cases, assesses patients at Regents Park Boca Raton who exhibit symptoms of undetected vision problems. His procedures are non-invasive and painless. Once he establishes a diagnosis, he works with Regents' occupational therapists, whom he trained to help patients practice strategies that can correct their problems. No medication is required.

Some rehab therapies are as simple as trying to insert a pen into a straw, forcing the eyes to work as a team. Other simple interventions may include yoked prism lenses, spot patching for double vision instead of a total patch and, of course, visual skills training that works on eye movements, eye teaming, depth perception, peripheral vision and perceptual skills.

“In strokes,” said Dr. Lampert, “you have a lot of visual field loss. With head injury and strokes you have a lot of binocular vision problems and usually an increase in exophoria, meaning that as the eyes turn in to read, there’s a natural position they want to be in, and that may not be perfectly aligned with the words on the page. They eyes may have drifted out, so that one eye is pointing a half inch from the other eye. You then have to use forces in your brain, eyes, nerves and muscles to converge to overcome that. Our goal is to give patients that skill. We’re actually trying to train the patients.”

Although the U.S. Army launched a functional vision program for returning soldiers in 2011, there are few nursing homes in the country offering specialty programs in functional vision rehab. That’s because few optometrists are trained in the specialty — one reason people who read 20/20 on an eye chart still have difficulties.

Simple and non-invasive tests help isolate problems.Dr. Lampert gauges how well this patient's eyes are working as a team.

Dr. Lampert speaks at the CURE Symposium in South Florida.Larry Lampert is an internationally recognized expert in functional vision rehabilitation and is a frequently sought speaker at conferences and science symposiums.