Outside Magazine names the Carolina Cup as one of two must-attend stand up paddle board races in 2014. Dave Kalama to address participants in pre-race keynote address. 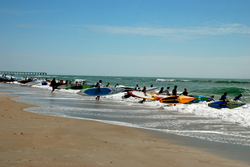 Start of the 2013 Graveyard Elite Race at the Carolina Cup

"I’ve paddled the Molokai channel five times and I’ve never been in as much pain as I was after this race."

The Wrightsville Beach Paddle Club is preparing to welcome over 700 Stand Up Paddlers from around the world for the 4th Annual Carolina Cup at the Blockade Runner Beach Resort April 23-27, 2014. As the first large international paddle race after the winter hiatus, the Carolina Cup offers a chance for professional and amateur paddlers to test their skills and abilities against their peers, setting the scene for the upcoming race season.

Outside Magazine named The Carolina Cup one of the two must-attend stand up paddle board races in 2014 as part of their 2014 race guide in the March issue. This year, legendary Stand Up Paddle Surfer Dave Kalama will address all registrants at a pre-race dinner Friday night.

2013 Elite race winners Annabel Anderson and Danny Ching will be back to defend their titles in the showcase 12.5 mile Graveyard race, during which paddlers circumnavigate the island of Wrightsville Beach. The Graveyard race has been described as “The most technically challenging race in the world,” requiring racers to complete a beach start through the surf, paddle in and out of inlets, maintain speed during flatwater, and surf in to the finish line. “I’ve paddled the Molokai channel five times and I’ve never been in as much pain as I was after this race,” said 2013’s second place finisher Jenny Kalmbach. “The most versatile paddler will win the Elite Race,” says Wrightsville Beach Paddle Club Board Member John Beausang. “This race requires skill in every discipline of stand up paddle boarding: ability to read water, paddle in the open ocean, surf a race board, and achieve speed during flatwater portions.”

Paddlers of all experience levels on a variety of watercraft (there are classes for outrigger canoes, ocean kayaks, surfskis, and traditional prone paddleboards in addition to stand up paddle boards) will find something to do at the Carolina Cup. There are four races: The 12.5 mile Graveyard (Elite) race, The 6 mile Money Island (Open) race, the 3.5 mile Harbor Island (rec) race, and the Kids’ race on Sunday. Racers can also register for small-group clinics with some of the world’s most renowned paddle athletes, including Olympic medalists and world champions.

Every year the Carolina Cup has a charity component. In 2014, The Carolina Cup will be donating a portion of the race proceeds to The Ocean of Hope (O2H), which raises money for the Sarcoma Alliance. This organization assists patients diagnosed with sarcoma cancers with the end goal of earlier detection and treatment. Many patients diagnosed with sarcoma cancers are children and adolescents. Earlier treatment reduces risk of amputation and premature death.

Throughout the weekend, registrants and the general public can demo boards and paddles and browse the Expo at the Blockade Runner Beach Resort. “The entire weekend is a big family reunion—reconnecting with friends made during last year’s race season and planning where to meet up again in 2014,” says Beausang. “We work hard to put southern hospitality into this paddle race, making it a fun event where regular paddlers can rub elbows with the pros, and everyone can enjoy a relaxed atmosphere.”

Registration is now open for the 2014 Carolina Cup. Visit the website to learn more and register.

About the Wrightsville Beach Paddle Club

The Wrightsville Beach Paddle Club, LLC was set up by a small group of paddlers who wanted to foster the local, regional and national community of stand up paddlers. The idea was to take the events out of the hands of individual surf shops and brands in order open the door to all surf/sup shops and brands and encourage a spirit of camaraderie throughout the paddle community.

Board Members:
Mark Schmidt: Owner, Schmidt Custom Builders. Mark is a surfer and paddler, husband and father who lives and works in Wilmington, NC.

Brad Howard: Owner of Howard Building Supply in Wilmington, NC. Lifelong surfer, stand up paddler and most likely to blow something up.

James Bain: Owner of Epic Food Company, Fast, Fresh Food in Wilmington, NC. If you don’t like James’ cooking, you need to see a doctor. James’ 3 boys are the next generation of SUPremacy.

John Beausang: Owner/Janitor of Distressed Mullet, an online resource for Standup Paddling in the United States and beyond. john(at)distressedmullet(dot)com. John’s a surfer, freelance writer, husband and father.

Stand Up Paddle Board Expo and Demo at the Blockade Runner