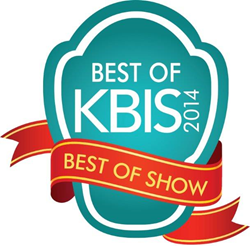 'We are incredibly honored to win two KBIS awards, including the top accolade, among 75 entrants and major brands we know and respect,' states Dacor President Steve Joseph.

The Best of KBIS 2014 awards, known as the “Oscars of Home Design,” were announced at the show on Wednesday, February 5th. Judges of the competition, including members of the Modenus BlogTour Las Vegas, selected the Dacor wall oven, from more than 75 entries, based on its functionality, quality, durability, flexibility, aesthetics, style and innovation.

“We are incredibly honored to win two KBIS awards, including the top accolade, among 75 entrants and major brands we know and respect,” states Dacor President Steve Joseph. “We believe Dacor has earned these prestigious awards because we focus on innovations that truly matter to the cooking experience and enhance the lives of our customers.”

Additionally, Dacor is the recipient of several other recent awards:

About DACOR
Founded in 1965, Dacor is a manufacturer of ultra-premium kitchen appliances. Designed and built in California, Dacor’s cooking appliances integrate function and technology to create high-performing, intuitive products that reflect the lifestyle and needs of the passionate cook. For nearly 50 years, Dacor has been responsible for many of the innovations that have improved the way people cook in the modern kitchen. Dacor is family-owned and embraces the legacy, heritage and expertise of a third generation to lead the company into a new age of cooking innovation. For more information about Dacor and its products, visit dacor.com.