Leading American fashion illustrator, Barbara Tyler Ahlfield, releases a statement alerting artists and collectors to the importance of preserving and protecting their archives of original fashion illustrations before they are lost forever. 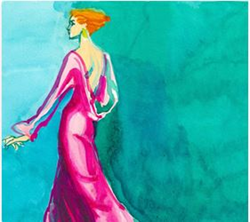 "However, the illustrations that filled newspapers and magazines of yesteryear will become valuable in the contemporary art world as they gain historical value as well as value as an art form “ stated Barbara Tyler Ahlfield, American fashion illustrator.

The illustrations, produced by trained artists with a flair for fashion, were part of a long retail newspaper advertising tradition composed of artwork and copy featuring seasonal apparel for men, women, children and home furnishings that were sold in department stores across the nation. Now, with American department stores and newspapers in decline, hand-drawn retail fashion illustration has become virtually non-existent, replaced by photography and digital art.

“Before photography and digital marketing, retail-advertising fashion illustration had a large influence on everyday style as these drawings provided a daily fashion show in America’s newspapers. Today, that has all changed as people now receive their fashion education and information from different sources. However, the illustrations that filled newspapers and magazines of yesteryear will become valuable in the contemporary art world as they gain historical value as well as value as an art form," stated Barbara Tyler Ahlfield, American fashion illustrator.

Collections of past original retail fashion illustration, a contemporary art form, are being sought by collectors before these archives are lost forever as they languish in old file drawers and boxes in attics and garages.

Most recently, the contemporary art form took center stage as Christie's South Kensington, London, hosted a December 2013 exhibition of fashion illustration as a salute to the genre's collectability and inclusion as a unique art form.

Barbara, a leading retail fashion illustrator in the art/fashion/advertising industry has been cataloguing her own extensive 30-year archive, unique for its diversity of style and scope. For more information on Barbara Tyler Ahlfield and her illustrations, please visit: http://www.fashionillustrationandmore.com/.

Barbara started drawing at the age of two and was soon decorating her bedroom walls with crayon fashion drawings. As a child she was fascinated with the glamorous fashion she saw in the old black and white films on Television as well as the formal portraits she studied during children’s classes at the Rochester Memorial Art Gallery. Following college, she united her loves of art and fashion into a career that spanned 30 years as one of the leading, award winning retail fashion illustrators in the country.

The archive of her illustrations is one of the few existing collections of American fashion illustration over the last quarter century and offers a retrospective of the American woman’s changing sense of style as well as changing illustrative styles. On any given day her full page illustrations appeared in many of the major newspapers in the country including the New York Times, Chicago Sun Times, Washington Post, Philadelphia Inquirer, etc. showcasing top American fashion designers for the major US department stores such as Lord and Taylor, Nordstrom, Dillards, John Wannamaker and many more. For more information, please visit: http://www.fashionillustrationandmore.com/.