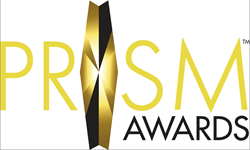 Celebrating the ART of Making a Difference

The Entertainment Industries Council, Inc. (EIC) has announced the nominees for the 18th Annual PRISM Awards. The PRISM Awards honor TV, movie, music, online, and comic book entertainment that accurately depicts drug, alcohol and tobacco use and addiction, as well as mental health issues. The Nomination Review Committee of over 80 representatives of both the entertainment industry and health field, selected nominees from nearly 400 productions submitted, according to Brian Dyak, President and CEO of EIC.

Winners will be announced during a ceremony on April 22, 2014 at the Skirball Center. For more information on the ceremony and tribute program, please visit our website. The 18th Annual PRISM Showcase is set to be nationally televised in September as part of National Recovery Month through flagship airing partner FX Network, as well as other cable networks, broadcast stations, video on demand, and web streaming.

Christmas with Tucker (Hallmark) and the Lifetime movies Anna Nicole, Call Me Crazy: A Five Film, House of Versace, and Ring of Fire earned nominations for TV Movie or Miniseries. TV Movie Performance nods went to Agnes Buckner (Anna Nicole), Gina Gershon (House of Versace), and Jewel and Matt Ross (Ring of Fire), as well as the ensemble for Call Me Crazy. Also nominated was daytime drama series Days of Our Lives (NBC), which has won multiple times over the years.

In the Teen or Children’s Program arena, nominees were three storylines from Degrassi: The Next Generation (TeenNick) and an episode of Nick News with Linda Ellerbee (Nickelodeon). Nick News has won twice before and Degrassi took the award last year. Original Internet Programming nominations were for the WIGS series Lauren and Susanna, and for online webisode Next Week’s Game. Internet performance nominees were Jennifer Beals and Troian Bellisario for Lauren, and Maggie Grace and Anna Paquin for Susanna. This is the first year online programming is being recognized.

Talk Show Episode
The Doctors – "New Heroin Debate"
Dr. Phil Show – "Battle with Anxiety Lands Him on
the Bench"
Dr. Phil Show – "Saving Loni: From Suburbs to the
Slums"
The Steve Wilkos Show – "Teens: Addiction and
Pregnancy"
The Trisha Goddard Show – "I Abuse Her and Treat
Her Like an Animal…I Need Help"

Feature Film Documentary
The Anonymous People
My Father and the Man in Black: Growing Up with
Johnny Cash and the Father He Barely
Knew
Running from Crazy
Salinger

EIC is a non-profit organization founded in 1983 by leaders within the entertainment industry to bring the power and influence of the industry to communicate about health and social issues. The organization is considered to be the chief pioneer of entertainment and journalism outreach and a premiere success story in the field of entertainment education. This mission relies on providing resource information to the creative community and culminates in recognition of the industry through the national television special PRISM Showcase which addresses accurate portrayals of substance use issues and mental health concerns. The organization also produces the SET Awards, honoring positive and non-stereotypical portrayals of science, engineering and technology.