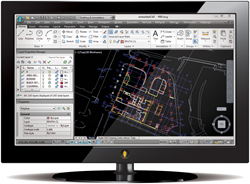 MicroSurvey embeddedCAD 2014 is a standalone application that is powered with Autodesk Technology™ and includes the latest AutoCAD® OEM 2014 enhanced with the suite of MicroSurvey tools.

Both releases are built specifically for the demanding needs of land surveyors, contractors and civil engineers, and include many new features requested directly from customers.

MicroSurvey inCAD 2014 is a powerful plugin that transforms AutoCAD® into a survey and design powerhouse. It adds the MicroSurvey feature set to the latest Autodesk® software – including AutoCAD® 2014, AutoCAD Civil 3D™ 2014, and AutoCAD Map 3D™ 2014 – to offer a complete survey drafting toolkit, including COGO, DTM, traversing, adjustments, volumes, contouring and more.

MicroSurvey embeddedCAD 2014 is a standalone application that is powered with Autodesk technology and includes the latest AutoCAD® OEM 2014 enhanced with the suite of MicroSurvey tools. Like inCAD 2014, it incorporates the full suite of survey drafting tools. MicroSurvey embeddedCAD 2014 includes a licensed copy of AutoCAD OEM 2014, and it opens and saves AutoCAD® 2014 drawing files, so implementing it in existing AutoCAD environments is smooth, painless and free of conflicts.

Both releases are built specifically for the demanding needs of land surveyors, contractors and civil engineers, and include many new features requested directly from customers. "Several years ago we implemented a transparent and easy to use online feedback forum where our customers could submit their ideas and suggestions for improvements to our products," said Darcy Detlor, president of MicroSurvey. "The feedback system lets our users propose their feature requests and allows them to cast votes on any request that has been submitted. Requests with the most votes are given the highest priority and get our attention, ensuring that we are working on features that our customers really want.”

MicroSurvey focused its development efforts on adding several new geodetic tools, hundreds of new coordinate systems, and geoid files. Users can now store and edit points using their latitude and longitude values, view combined scale factors and convergence angles at any point in their drawing or project database, and transform between ellipsoidal and orthometric elevations using geoid files. Other powerful new productivity tools include a 2D draw mode for creating a 2D drawing while maintaining 3D elevation data, as well as rescaling tools for changing the base drawing unit of an entire drawing or specific text.

Both MicroSurvey inCAD 2014 and MicroSurvey embeddedCAD 2014 are available in two feature levels – Premium and Standard –giving users the choice between two tiers of features to ensure they are getting precisely what they need.

Free trial versions of the software can be downloaded from the MicroSurvey website. For more information, visit http://www.microsurvey.com.

About MicroSurvey
MicroSurvey Software Inc., a member of the Hexagon family of companies, has been developing software and hardware solutions for the surveying and mapping industry for more than twenty five years.