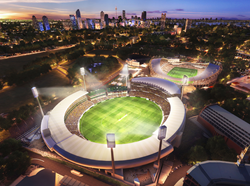 The MLB season opens March 22 at the storied Sydney Cricket Ground down under, built in 1848 next to downtown and seen here prior to being converted for the ballgame. U.S. Opening Day is March 31.

The Boys of Summer are back. This despite old man winter continuing to pound the nation with record-level snow and bone-chilling temps. What’s more, Opening Day takes place down under this year, as the 2014 regular season officially hits the field on March 22 at the storied 40,000-seat Sydney Cricket Ground established in 1848.

This year’s opening game features the Los Angeles Dodgers and Arizona Diamondbacks, and it will be the first MLB contest played in Australia in 100 years. Nine days later, traditional Opening Day in America is on deck with 14 games, including 10 divisional match-ups, set for Monday, March 31, 2014.

Nine games are scheduled for Tuesday, April 1st, including the season debuts for the Houston Astros and the New York Yankees at Minute Maid Park. The final day of the 2014 regular season will be Sunday, September 28th and will feature 12 divisional games.

“That’s why we’re proud to offer sports fans the most comprehensive and continuously updated selection of sports tickets online, with a worry-free guarantee to protect their purchase,” said Ault

“To access the full line-up of MLB Baseball tickets now available, customers can go to BuyAnySeat.com and search for the MLB Baseball – then select their tickets.”

According to mlb.com, the past ten years have seen the largest attendance numbers in history. More than 74 million people attended big league games in 2013, the sixth-highest attendance of all time. Eight clubs surpassed the three-million mark, while 15 eclipsed the 2.5-million mark, up from 13 in 2012.

The eight to reach three million have all done so in consecutive seasons, including the Yankees in 15 straight, Angels and Cardinals over 10 years, Phillies over seven, Giants during the past four, and the Dodgers, Rangers and Tigers in back to back years.

Baseball's history in Australia goes back more than 150 years. This year’s Opening Day game will mark the 100th anniversary of an exhibition game played by the Chicago White Sox and the New York Giants on the same storied cricket grounds on January 3, 1914. The White Sox defeated the Giants, 5-4 before 10,000 fans. (Source: mlb.com).

This year’s 162-game season, split between home and away games for each of the sport’s 30 teams, runs from March 22 to September 28. That adds up to 2,430 games yet to be played in this year’s regular season, not counting the up to 20 postseason games the World Series finalists might play. The Boston Red Sox are the reigning World Series champs having clipped the St. Louis Cardinals 4-2 last October.

Other important dates this year include Jackie Robinson Day on Tuesday, April 15; the first day of the 2014 MLB Draft on Thursday, June 5; and Baseball's 85th All-Star Game at Target Field in Minneapolis on Tuesday, July 15.